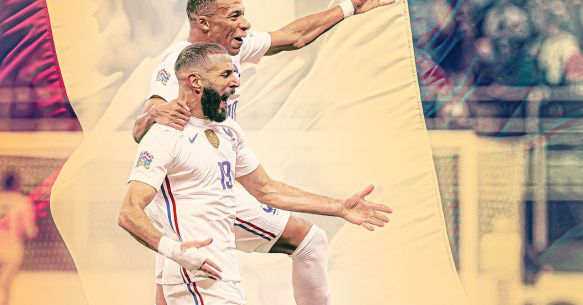 “If the UEFA Nations League final between France and Spain was a trailer for the next era of international soccer, then I can’t wait for the feature film. Here were two teams that, when playing at their peak, could make a good claim to be the best on the planet. We had Spain, whose intricate patterns of passing bewildered Italy during this summer’s European championships, and who were the only team to make Roberto Mancini’s champions look consistently vulnerable. … To be reductive, this final was poetry against pragmatism: and France duly and sometimes dully prevailed 2-1. Still, some might say, it was only the Nations League, right? A tournament formed as no more than a series of glorified friendly fixtures. Who truly cares? …”
The Ringer 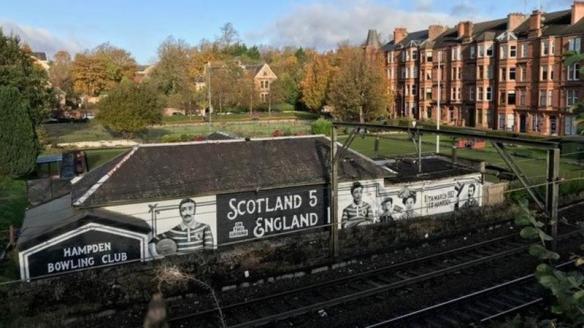 Watson is also depicted in a mural at the site of the original Hampden Park
“There are two murals of black footballers facing one another across an alleyway in Glasgow. One helped shape football as we know it, the other is Pele. Andrew Watson captained Scotland to a 6-1 win over England on his debut in 1881. He was a pioneer, the world’s first black international, but for more than a century the significance of his achievements went unrecognised. Research conducted over the past three decades has left us with some biographical details: a man descended of slaves and of those who enslaved them, born in Guyana, raised to become an English gentleman and famed as one of Scottish football’s first icons. And yet today, 100 years on from his death aged 64, Watson remains something of an enigma, the picture built around him a fractured one. …”
BBC 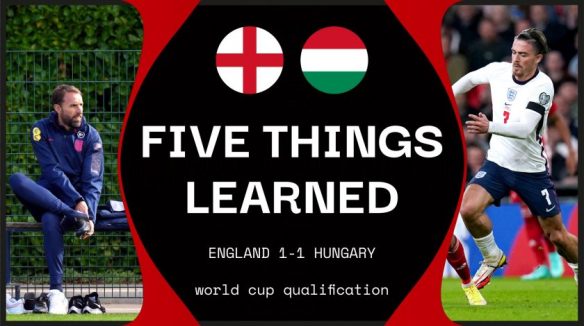 “Jack Grealish could not hide the frustration. And nor could pockets of the England support inside Wembley on Tuesday night, some of whom booed the decision. There were 62 minutes on the clock, the team were level at 1-1 with Hungary and Gareth Southgate had substituted Grealish, replacing him with Bukayo Saka. The TV cameras lingered on Grealish as he took his seat. The midfielder shook his head before putting it down and running his fingers through his hair. It was the night when Southgate tried a different blend, dispensing with his usual minimum of six defensive-minded outfield starters and going with five whose first instinct is to attack. It was Phil Foden and Mason Mount as the No 8s in the 4-3-3, leaving only Declan Rice in front of the defence, and there is no doubt that it was what the fans had demanded. …”
Guardian
Guardian: Southgate must not ditch newfound attacking intent. Fail again. Fail better the same way
“We didn’t play at the level we need to play” – Five things learned as England slump to a 1-1 draw with Hungary