Analysed: Are Barcelona the new Stoke or are Stoke the new Barcelona? 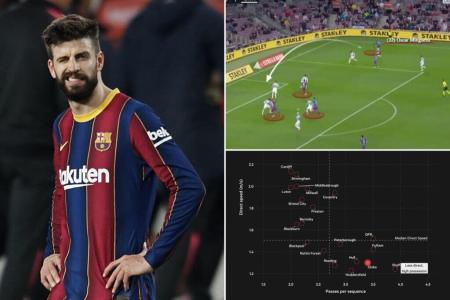 “It’s fair to say that the atmosphere at Barcelona is not exactly rosy at the moment. The off-field chaos is impossible to ignore, with debts of over €1.2 billion meaning one of the world game’s most famous clubs faces the very real prospect of bankruptcy. Of course, such huge financial difficulties have spilt onto the pitch, with Barcelona forced to offload some of their most prized assets — including Lionel Messi, the best player in their history (which is saying something when Diego Maradona and Johan Cruyff have also worn their colours). This was always going to lead to a drop-off in quality in Barcelona’s performances on the pitch, but the fans still expect more than they’re getting. …”
The Athletic (Video)
Barcelona’s 54 crosses in one dreadful game – how Koeman’s side are ‘playing like Stoke City’

This entry was posted on Saturday, September 25th, 2021 at 10:47 pm and is filed under Champions League, FC Barcelona, Football Manager. You can follow any responses to this entry through the RSS 2.0 feed. You can leave a response, or trackback from your own site.