Aimé Jacquet – Zinedine Zidane
“The 1998 FIFA World Cup Final was a football match that was played on 12 July 1998 at the Stade de France in the Parisian commune of Saint-Denis to determine the winner of the 1998 FIFA World Cup. The final was contested by defending champions Brazil and the host nation France, marking the first time that a World Cup final was disputed between the host nation and the defending champion. France won the match 3–0 to claim their maiden World Cup, with the timing of the match two days before Bastille Day adding to the significance of the victory. Zinedine Zidane, who was named man of the match, scored twice before half-time and Emmanuel Petit added a third goal in the last minute. The match had an attendance in the region of 75,000. … The match also saw speculation on the condition of the Brazilian striker Ronaldo, who suffered a convulsive fit on the eve of the match. After initially being left out of the team sheet, in spite of his physical state, it was announced just 72 minutes before kick-off that he was going to play. In the match, he sustained an injury in a clash with French goalkeeper Fabien Barthez. Although it was believed that the decision to play Ronaldo had backfired, it was understandable as the player had been a crucial member of the side throughout the tournament, having scored four goals and created three more. …”
Wikipedia
Tactical Analysis: France vs. Brazil
W – Aimé Jacquet, W – Roger Lemerre
W – Zinedine Zidane, W – Didier Deschamps
NY Times: Sun Shines on France’s National Heroes
YouTube: Tactics Explained | 1994-1998: A History Of The World Cup, How France’s 4-3-3 won the 1998 World Cup | Tactical Analysis: France 3-0 Brazil | Zidane vs Ronaldo 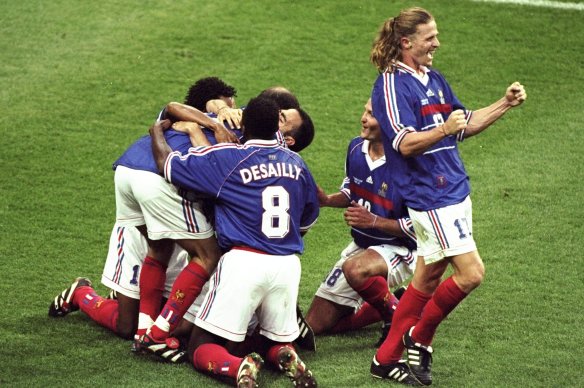