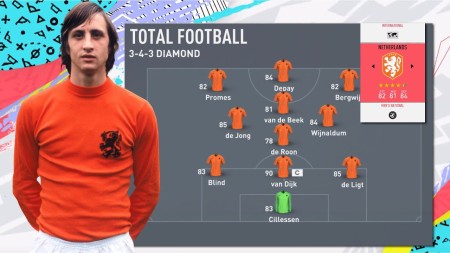 listen, internationally spelled Cruyff; 25 April 1947 – 24 March 2016) was a Dutch professional football player and coach. As a player, he won the Ballon d’Or three times, in 1971, 1973, and 1974. Cruyff was a proponent of the football philosophy known as Total Football explored by Rinus Michels, and is widely regarded as one of the greatest players in the history of the sport, and one of the greatest managers. In the late 1960s and early 1970s, Dutch football rose from a semi-professional and obscure level to become a powerhouse in the sport. Cruyff led the Netherlands to the final of the 1974 FIFA World Cup and received the Golden Ball as player of the tournament. … Cruyff is widely seen as an iconic and revolutionary figure in history of Ajax, Barça, and the Oranje. David Winner, the author of Brilliant Orange, wrote about Cruyff’s influential career in the football world, ‘There have been lots of brilliant football figures down the years, but none has been as significant as Johan Cruyff. … As coach at Ajax and Barcelona, he built thrilling sides, nurtured a remarkable number of genius players and influenced many of the most important teams in the world. .. Once radical and revolutionary, Cruyffian principles have become standard throughout the modern game. His blueprint for developing young players has been copied all over the world.’ …”
Wikipedia, W – Style of play and views on the game
Total Football Journeyman: From Mighty Magyars to Flying Dutchmen
Guardian: What formation did Holland’s Total Football side actually play?
Cruijff’s Total Football Guide (433-2)
W – History of AFC Ajax
W – Rinus Michels, W – Ruud Gullit, W – Frank Rijkaard, W – Marc Overmars, W – Dennis Bergkamp, W – Louis van Gaal
YouTube: Total Football Explained 5:09, Football’s Greatest International Teams .. Netherlands 1974 26:08, Netherlands – Argentina: Bergkamp Goal 1998, Johan Cruyff ● Flair Like No one Else (Rare Footage)

USMNT, Ricardo Pepi shine against Honduras in second half of World Cup qualifier

“The U.S. men’s national team has gotten its World Cup qualifying campaign back on the rails with a 4-1 win over Honduras on Wednesday night. After entering halftime down 1-0, manager Gregg Berhalter made three substitutions to start the second half with aplomb. What ensued was a four-goal onslaught, as the USMNT climbed all the way to third in the Octagonal as the first international window comes to a close. It was a classic ‘tale of two halves’ type of match. After struggling in the 4-3-3, Berhalter lined his team up in a 3-4-3. What ensued was an even sloppier 45 minutes than any of the previous four intervals, with gaps galore in the midfield, between the back seven and the attack, and all over the defensive line. …”
The Athletic
NY Times: For U.S. Men’s Team, Win Salvages a Week They’d Rather Forget
Guardian: A brilliant 45 minutes against Honduras failed to mask US World Cup problems