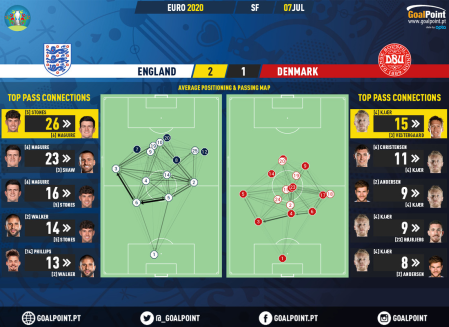 “Gareth Southgate values control almost above anything else. For England, this has been a tournament about control. He has talked about aping Portugal at Euro 2016 and France at the World Cup, of learning how to manage games. But there are two ways of controlling games. There is controlling games by attacking, as England did with remarkable intensity and consistency between the start of the second half and the end of the first half of extra time, and there is controlling the game as England did in the second half of extra time, keeping the ball away from Denmark with such efficiency that they managed only one touch in the England box in that period. Control, it turns out, doesn’t have to be boring. …”
Guardian – Jonathan Wilson
Pickford’s positioning at fault for Denmark’s clever free-kick and wall routine? It’s not that simple…
Slate: The New Strategy That Put England Into the Euro 2020 Final (Video)
Two footballs, a laser pointer and Sterling’s penalty: The England vs Denmark controversies explained
Tactical Analysis: England vs. Denmark
YouTube: Tactical Analysis: England 2 – 1 Denmark | How Southgate’s Central Overload Prevailed

This entry was posted on Thursday, July 8th, 2021 at 11:35 pm and is filed under Denmark, England, Euro 2020, Football Manager. You can follow any responses to this entry through the RSS 2.0 feed. You can leave a response, or trackback from your own site.