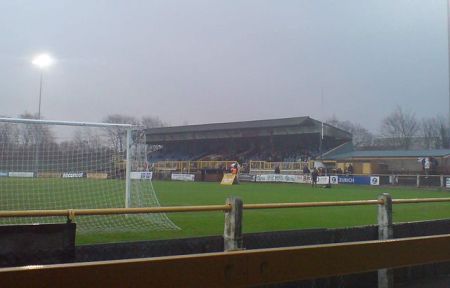 The Gander Green Lane ground, home of Sutton United
“Hartlepool United returned to the English Football League as they beat Torquay United 5-4 on penalties, despite Gulls goalkeeper Lucas Covolan scoring a stoppage-time equaliser. Luke Armstrong’s first-half strike looked to have sealed promotion for Pools after Torquay’s Kyle Cameron had headed goals disallowed in either half. Covolan headed in a 95th-minute cross to send the game into extra time. Torquay’s Matt Buse missed a sudden-death penalty to see Pools go up. In a game that had everything it was fitting that it ended with a sudden-death shootout – all four opening penalties were missed with Covolan saving from Nicky Featherstone and Armstrong while Billy Waters and Danny Wright missed for the Gulls. …”
BBC
The 2 clubs promoted to the Football League in 2021….
Football as it should be: Chasing the dream with Sutton United, their dancing kitman and tactics talks in the showers (April 22, 2021)
W – Sutton United F.C., W – Gander Green Lane, W – 2020–21 National League

“‘He knows why he is here and this is the most important thing,’ Netherlands head coach Frank de Boer said of Denzel Dumfries ahead of his nation’s last sixteen clash against the Czech Republic. ‘He will read about it; he will hear about it but I’m not scared he will do strange things because of rumours about his future.’ Although it was speculation regarding Dumfries’ fate that dominated the headlines before kick-off in Budapest, it was a strange play by defensive teammate Matthijs de Ligt that changed the course of the tie. Ten minutes into the second period, the Juventus starlet was dismissed for handling the ball on the edge of the Dutch penalty. Although the resultant free-kick was struck into the wall, De Ligt’s absence disrupted what had already been a topsy-turvy round of sixteen tie. Just moments before the 21-year-old denied Patrik Schick an obvious goalscoring opportunity, the Netherlands had one of their own – with Donyell Mallen inches from rounding Czech goalkeeper Tomáš Vaclík. …”
Breaking the Lines
YouTube: Netherlands’s Tactical Analysis Preview | Dumfries and De Jong to derail the Czechs’ campaign