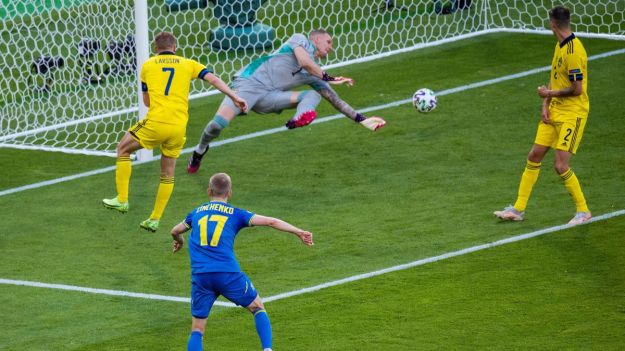 Ukraine’s Oleksandr Zinchenko scores the opening goal
“It was never going to live up to Monday’s drama, but Ukraine and Sweden closed out the Round of 16 with a dramatic ending of their own, after a tremendously absorbing match. Ukraine have a new folk hero, his name is Artem Dovbyk and generations of Dovbyks will remember the moment he scored his very first international goal. Or, better yet, they’ll look it up on YouTube, because if they’re merely told the story, they may not believe it. Dovbyk, a 24-year-old forward with SC Dnipro-1, only made his international debut in March and is not exactly what you’d call a rising star. He’s a young man whose itinerant career has seen him play in the Ukrainian second division, the Danish league and the Moldovan league. Before Tuesday night, he had played just 51 minutes of international football… against Kazakhstan and Bahrain. …”
ESPN (Video)
Euro 2020: Artem Dovbyk scores dramatic 120th minute winner to send Ukraine throught to meet England
Guardian: Ukraine strike late in extra time against Sweden to set up England quarter-final