The Trials And Tribulations Of Slavia Prague 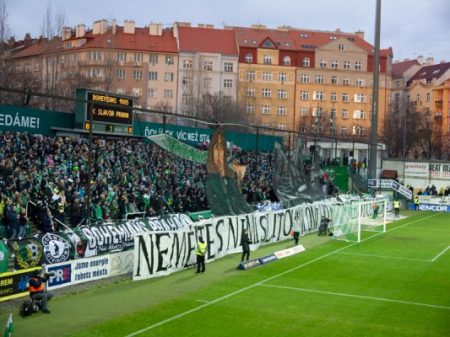 Bohemians 1905 beat Slavia Prague in February this year in a shocking result
“After 301 days, Bohemians achieved what no other club in the Czech League has managed and beat Slavia Prague. The reigning Czech champions had emerged from the midwinter break with 17 wins and three draws in the first half of the season. Buoyed by Chinese owners and led by Jindrich Trpisovsky, Slavia are too good for the rest of the Czech league. Or were. Shorn of a host of influential players, Slavia struggled to overcome a dogged Bohemians side backed by the usual cacophony of smoke bombs and drums in their crumbling Dolicek stadium. After a goalmouth scramble, Jan Vodhanel stabbed home for a 1-0 win. …”
World Soccer

This entry was posted on Thursday, June 18th, 2020 at 12:34 am and is filed under Europe. You can follow any responses to this entry through the RSS 2.0 feed. You can leave a response, or trackback from your own site.