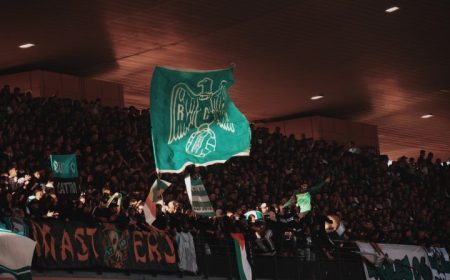 The Raja Ultras, led by the Capo (in lime green jacket standing on the railing between levels) fill the stadium with drum lines, chants, and songs.
“Zakaria Belqadi stands on a railing before a hoard of fans in the cheapest section of Le Grand Stade de Marrakech. He raises his arms, and the stadium begins to throb with the voices of young men. The song they sing has become well-known across the Arab world, and its lyrics have almost nothing to do with soccer: ‘In my country they abuse me … Only [Allah] knows, in this country we live in a dark cloud.’ These are fans of Raja Casablanca, one of Africa’s most successful soccer teams. Raja has won 11 Botola (Moroccan domestic league) championships and seven various Confederation of African Football (CAF) titles, among other honors. For many young men in Casablanca’s poorer neighborhoods, Raja has become a way of life, and the team’s ‘ultras’ fan clubs have even become organized, politically active and occasionally violent. …”
Africas a is Country
W – Raja Casablanca
YouTube: Raja Casablanca Ultras – Best Moments (Aug 26, 2016)

Football is all about speed: The growing importance of coaching

“I moved to Barcelona in January 2008, six months before Josep Guardiola took over as the head coach of FC Barcelona. It was the beginning of four years of tika-taka. Although I have always liked Real Madrid more than their rivals, I was somewhat seduced by the style of football played by the Catalans, especially Messi, Iniesta and Xavi; the latter in that period deserved to win one of Messi’s Ballon d’Or. After a year of watching tika-taka, I grew tired of the often pointless sideways passing of the ball. The worse part was that, at times, it seemed as if Barcelona were unable to change their tactics, as a growing number of opponents had learned how to play them. I started to wonder whether Guardiola’s rigid belief in ‘one-system-fits-all’ was not only ruining the extraordinary players’ freedom but also showing a lack of tactical skills. …”
Football Pink

Premier League returns: The 2019-20 season so far in eight graphics

“After a 100-day absence because of the coronavirus pandemic, England’s top flight will return to action on Wednesday. But where did we leave off and what are the challenges facing sides at both the top and bottom over the next nine games? BBC Sport helps you get up to speed with a picture of the Premier League in eight graphics. …”
BBC