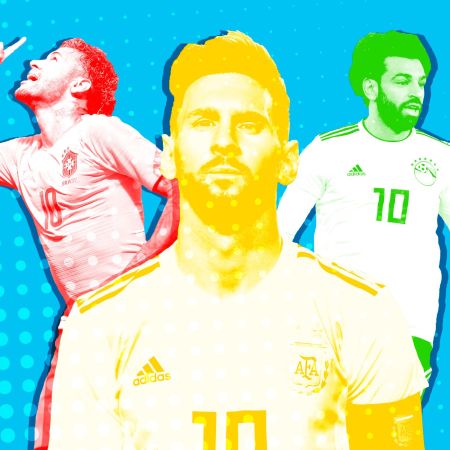 “In Inverting the Pyramid: The History of Soccer Tactics, Jonathan Wilson describes the symbolism of the no. 10 as “the ‘free-spirited epitome of the artistry of soccer.’ And while free-spirits have become fewer and farther between as more money’s been poured into the game and managers have systematized their tactics, the no. 10 is still typically given to the most creative player on the team. Or, in Poland or Nigeria’s case, it’s given to a defensive midfielder best known for his ability to make tackles and pass the ball sideways. But each team has its reasons, and so with all of the World Cup squad lists now officially released, we each ranked all the nos. 10 set to play in Russia this summer, tallied the results, and came out with the following list. No. 1 is obvious, but that’s about the only spot we came close to agreeing on. Yes, someone, who shall remain nameless out of our sheer fear for his safety, didn’t put Lionel Messi first.” The Ringer

This entry was posted on Saturday, June 9th, 2018 at 7:14 pm and is filed under Argentina, Belgium, Brazil, Colombia, Denmark, England, Europe, France, Germany, Iceland, Jonathan Wilson, Mexico, Morocco, Nigeria, Peru, Portugal, Russia, Saudi Arabia, Spain, Swiss, Uruguay, World Cup 2018. You can follow any responses to this entry through the RSS 2.0 feed. You can leave a response, or trackback from your own site.