The Evolution of the Number 6: Beauty and the Beast 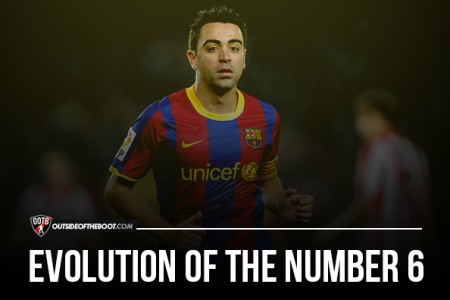 “Football goes in cycles, the past is the key to the future and old systems and styles may become popular in the future. A good example of this is the 3-5-2 formation originally used in 1986 by the world cup winning Argentine team. The formation went out of vogue but has been resurrected by Antonio Conte in Juventus and in the Italian national team and is actually becoming popular as even Bayern and most recently Everton have used the formation.” Outside of the Boot

“1) Manchester City v Monaco. Pep Guardiola will be content with this draw, but Monaco are among the most exciting sides in Europe and perhaps the most underrated team in the competition. Leonardo Jardim has created an exciting side who have scored an incredible 53 goals in 17 Ligue 1 matches. Although Monaco share the goals around impressively, it is notable that Radamel Falcao has found his shooting boots again, scoring five goals in Monaco’s past two games. They are also tactically flexible, able to play both 4-4-2 or 4-2-3-1 effectively, as they demonstrated with 2-1 victories home and away against Tottenham Hotspur in the group stage.” Guardian – Michael Cox

“Matt Busby, Ally McCoist, Alex Neil and Lee McCulloch are just a few of the famous (and not so famous) footballers who have emerged from the small Scottish town of Bellshill. Sitting just 16km from the centre of Glasgow, Bellshill has produced more than its fair share of top level footballers given its modest population of just over 20,000. The town also gave us a football manager who went to Italy for one season and came home with a rather unfortunate record in the Turin derby.” Guardian

MD 14 Team of the Week – Ingolstadt take down RBL, only Bayern take advantage!

“We covered the weekend’s action in our extensive recap yesterday, so let’s not waste any more time and get to the performers from the Bundesliga’s Team of the Week for Matchday 14! Goalkeeper – Freiburg’s Alexander Schwolow must be reading these as motivation, because it’s back to back appearances for the guy who was ranked as the worst goalie in the league by Squawka just two weeks ago.” Bundesliga Fanatic

Tim Vickery’s Notes from South America: Atletico Nacional look to strike a blow for the continent

“It was always unlikely that Atletico Nacional would be able to win two titles on the same day, on opposite sides of the planet. The first team squad are in Japan, representing South America in the Club World Cup, and hoping to make it to the final on Sunday – the same day that the Colombian league comes to a climax. Nacional were through to the semi final, and, giving a game to their reserves they drew 1-1 away to Santa Fe of Bogota in the first leg. But now, back in Medellin for the return match, they were down to the reserves of the reserves. With 25 players in the Far East, they were forced to field in effect an Under-21 side. They lost 4-0.” World Soccer