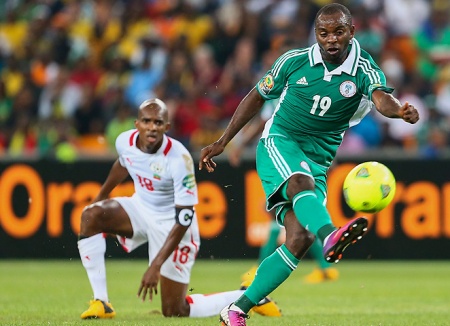 “Nigeria won the Africa Cup of Nations following a typically tight, tense final. Stephen Keshi was able to select Victor Moses (who had been a doubt) but Emmanuel Emenike was injured, and replaced by Ikechukwu Uche. Paul Put, who has tinkered with his formations and line-ups throughout the tournament, was able to name an unchanged side after Jonathan Pitroipa’s suspension was overturned. This was a disappointing game, both in tactical and entertainment terms. Nigeria played better football, but there were very few shots on target from either side.” Zonal Marking

Africa Cup of Nations 2013: Sunday Mba gives Nigeria victory at last
“It says much for the baffling politics of Nigerian football that a week before the Cup of Nations began there were moves afoot in the sports ministry to have Stephen Keshi replaced as coach. And it says much for the 52-year-old’s strength of character, his combination of thick skin, single-mindedness and good humour that he was able to ignore all the distractions so that he stood on the touchline in Johannesburg on Sunday night beaming as only the second man – after the Egyptian Mahmoud El Gohary – to win the Cup of Nations as both player and coach.” Guardian – Jonathan Wilson (Video)

Stephen Keshi has worked miracles for Nigeria, but will they keep him?
“Back in 2006, when Stephen Keshi was still manager of Togo, he gave an interview to a handful of journalists in a hotel lobby in northern Cairo. The first time I’d spoken to him, four years earlier in Bamako, he had been lying on a sun lounger by a swimming pool and, metaphorically at least, he still was. Keshi always gives the impression of being laid back. But for a moment, the hardness beneath showed through. ‘Some day,’ he said, ‘I will be coach of Nigeria and then they will know they have a coach.'” Guardian – Jonathan Wilson

Keshi avoids politics as usual by winning Africa Cup of Nations
“The Cup of Nations, in the end, was won and lost in the thunderstorm in Rustenburg. Nigeria had gone into its quarterfinal with hope but little concrete evidence of its abilities. Then it defeated the perennial favorites, Ivory Coast, 2-1 and discovered a profound sense that it would win the tournament. It went on to hammer Mali 4-1 in the semifinal before beating Burkina Faso 1-0 in Sunday’s final.” SI

Why I’ve fallen out of love with football

“A friend of mine says that when he’s driving and listening to one of the countless football programmes on talk radio, in which fans call in to rant about their team’s manager, opponents, referees, ballboys, et cetera, he feels the urge to phone in himself and say: ‘Have you ever realised it doesn’t really matter?’ That’s how I’ve come to feel about football. I played it until my left knee dissolved into pulp, and have written about it for 25 years, but now I often think: I don’t like the game any more. Partly, this is professional deformation: I’ve got too close to the adored object and seen what it’s really like. But partly, I’m suffering from a condition that is common among middle-aged men yet rarely discussed because it’s considered an embarrassing taboo. Football just isn’t what it’s cracked up to be.” FT – Simon Kuper

“Prior to the start of this season’s Premier League campaign, Tottenham supporters looked on nervously as the Emmanuel Adebayor transfer saga dragged on into August, wondering if we’d enter the season with Jermain Defoe as our only experienced first team striker. As it happened, we got Adebayor in before the window closed, but due to a mix of injuries, suspension, and lack of form, Adebayor was relegated to the bench while a red-hot Jermain Defoe banged in the goals for the first several months of the campaign.” Think Football

Futbol In A Baseball Park 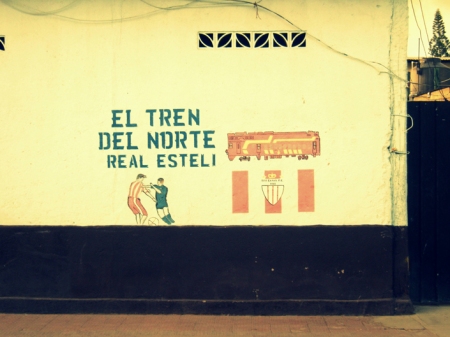 “On Sunday 27th January 2013 the final of the Copa Centroamericana was settled by a firm header from Costa Rican defender Geancarlo González. The hosts extravagant celebrations in their modern national stadium belied the fact that it’s not the most prestigious international tournament. Held every two years and featuring the seven Central American nations, the prize for the participants is obtaining one of five places at CONCACAF’s Gold Cup, held in the United States later in the calendar year. Such was the competition’s lack of esteem, beaten finalist Honduras’ domestic league had a full programme throughout, and the only European-based players called upon were those on a winter break.” In Bed With Maradona

What Do We Want From FSG?

“To be the owner of Liverpool Football Club is to put yourself in a curious position. The owner has profound influence over the entire football club (it is their business after all) and therefore can generally influence the team, but they are unable to affect the team on the pitch in the specific way the manager and players do. Some try, and end up looking foolish most of the time; in 1998 Ron Noades bought Brentford Football Club and installed himself as manager holding dual roles at the club. He did manage to get the Bees promoted but subsequently left the club with debts of £8 million. Having no check on his power at the club may have massaged Noades’ ego but ultimately hurt the club substantially. But he is an interesting case study simply because of his narcissistic way of solving the owner’s riddle of how they can simultaneously hold all of the power and none of the power.” Tomkins Times

Tottenham 2-1 Newcastle: all about Gareth Bale

“Gareth Bale scored twice in a match that started slowly, but turned into an exciting contest. Andre Villas-Boas handed a first start to Lewis Holtby – Jermain Defoe was injured, so Clint Dempsey played upfront. Alan Pardew named an unchanged XI from the side that beat Chelsea 3-2 last weekend. This was a relatively unexciting game tactically, but Bale’s half-time switch in position was very interesting.” Zonal Marking