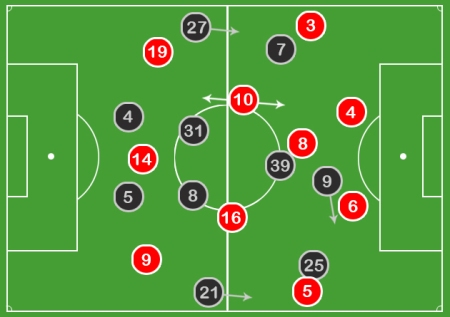 “Bayern Munich took took a big step in sealing qualification to the quarterfinals with an impressive away win against Arsenal. It was Bayern’s first ever win in London and thoroughly deserved on the run of play. Germany’s record champions dominated the majority of the match and again showed why they are one of the favorites to lift the trophy come May. Goals from Toni Kroos, Thomas Müller and Mario Mandzukic capped off a performance that further underlines just how focused and determined Bayern are to succeed this season, putting them firmly in the the driver’s seat in this tie. It took a fortuitous corner to get Arsenal back in the game in the second half with former Bayern player Lukas Podolski taking advantage of a rare lapse in concentration but the Bavarians gradually resumed control and didn’t let go until the final whistle.” Bundesliga Fanatic

Arsenal 1-3 Bayern: Arsenal outpassed and outpressed
“Bayern took a commanding lead following a dominant first leg performance. Arsene Wenger chose to leave out Olivier Giroud, using Theo Walcott as the primary striker with Santi Cazorla right and Aaron Ramsey in midfield. Left-back problems forced Thomas Vermaelen into that position. Jupp Heynckes was without Jerome Boateng and long-term injury victim Holger Badstuber, so Daniel van Buyten was forced to play at centre-back. Arsenal made another poor start at the Emirates, and despite a promising spell for Wenger’s side after the break, Bayern always looked the better side.” Zonal Marking

Comedy of errors leaves Arsenal with more questions to answer
“Realistically, Arsenal was never likely to beat a Bayern Munich side that is cruising to the Bundesliga title, but what Tuesday’s 3-1 Champions League loss might have offered was comfort. Yes, there was always the chance of an upset, but, realistically, a promising performance would have done, something that said, yes, this team isn’t perfect, but it is on the right track.” SI – Jonathan Wilson

Arsenal 1-3 Bayern Munich: Tactical Analysis of a Bavarian Battering
“Arsenal succumbed to a damaging 3-1 home loss to Bayern Munich on Tuesday night, leaving their hopes of advancing to the UEFA Champions League quarterfinals hanging by a thread. The Gunners enjoyed a 20-minute renaissance in the second half but only managed to carve out one real chance which fell to Olivier Giroud, and their consolatory goal was a product of a corner that shouldn’t have been awarded. Let’s take a look at how this game was won.” Bleacher Report

England should look to Germany for inspiration, coaches
“It would be unreasonable to use Bayern’s dismantling of Arsenal as sole evidence of the Bundesliga’s dominance over the Premier League, but among various other factors, it has become increasingly clear that Germany will imminently become European football’s true power base.” ESPN – Michael Cox

Arsenal put to the sword by Bayern Munich’s game intelligence
“At the stroke of half-time, Bayern Munich had the chance to go an unassailable three goals up instead of the 3-1 scoreline it eventually finished. The Germans had possession of the ball at the back before they quickly switched it forward to the on-rushing Philip Lahm. As the full-back picked up the ball, Jack Wilshere stretched his arms out as if to say ‘how did that happen.’ Bayern Munich might have felt the same sense of bewilderment when Mario Mandzukic flashed a header wide from Lahm’s cross.” Arsenal Column

Barca have Milan mountain to climb

“AC Milan took a surprise first-leg lead in their Champions League last-16 tie against Barcelona as they claimed a deserved 2-0 win. While Barca top the Primera Division by 12 points, Milan lie third in Serie A – but Kevin-Prince Boateng’s controversial opening goal set the Italians on their way at the San Siro.” ESPN

Barcelona’s black night draws ire as warning signs are ignored in Milan
“Jordi Roura’s words were bullish but the way that he delivered them was not. ‘We have total conviction that in Barcelona we’ll go through,’ said Barcelona’s assistant coach. “This is a bad result but this team deserves for people to believe in it. We are completely convinced: we’ll be at home, with our pitch and our fans. It is not impossible: we can turn this around perfectly.” He spoke quietly, flatly; as flat as his team had been. Through the doors, he could surely hear Milan’s fans singing.” Guardian

Wesley Sneijder’s step into the past leaves questions for Galatasaray

“After all the excitement and all the hype, Galatasaray’s big night in the Champions League fell rather flat. A Schalke side that has been in dire recent form went to Istanbul as patsies in the great narrative of Didier Drogba and Wesley Sneijder. But from the point of view of the home fans, they showed themselves rather better than had been anticipated, exposing the flaws that exist in this Galatasaray side despite their recent injection of glamour.” Guardian – Jonathan Wilson

Schalke raise questions over Drogba
“Schalke have announced they have lodged an appeal with UEFA after Didier Drogba was selected for Galatasaray in Wednesday’s 1-1 draw in the Champions League. The club tweeted: ‘There are doubts about the validity of the permission to play for Drogba in the Champions League. Schalke 04 reserves its rights and is looking into this.’ Drogba, 34, joined the Turkish side in January after claiming his contract with Shanghai Shenhua had been terminated as a result of a failure to pay his wages for three months. The Chinese club issued a statement on their website describing themselves as ‘deeply shocked’ by the move.” ESPN

For Italy’s ‘ultras,’ nothing black and white about football and racism

“Hardcore Italian football ‘ultra’ Federico is a Lazio supporter who happily admits directing monkey chants at black players. It is ‘a means to distract opposition players’ says Federico, a member of the Irriducibili (‘The Unbeatables’) group which follows the Rome-based team. ‘I am against anyone who calls me a Nazi,’ Federico told academic Alberto Testa, who spent time ’embedded’ with Lazio and Roma ultras for the book ‘Football, Fascism and Fandom: The UltraS of Italian Football,’ co-authored by Gary Armstrong.” CNN