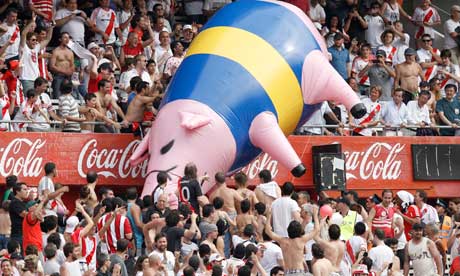 “The 2004, Observer Sports Monthly published its list of the “50 sporting things you must do before you die”. At number one was attending a ‘superclásico’, the passionate encounter between Argentina’s bitter rivals Boca Juniors and River Plate. The standard of the Argentinian league was declining even then – it has got a lot worse since – but the superclásico remains special. Sunday’s was ninth against fifth between two teams who, in all honesty, aren’t very good and yet el Monumental was packed, seething with noise and colour and passion.” Guardian – Jonathan Wilson

River Plate v Boca Juniors – where has the magic gone?
“The biggest occasion in South American domestic club football was back on Sunday when River Plate met Boca Juniors in a league match for the first time in almost 18 months. The big Buenos Aires derby is followed all over the continent for a number of reasons. One is the historic role played by Argentina in the consolidation of South American football. The British introduced the game to the South Cone. More than anyone else, the Argentines helped the spread of the game northwards. In terms of playing styles and fan culture, much of the continent takes its cue from Argentina.” BBC – Tim Vickery

“Manchester United snatched the three points after Chelsea went down to nine men at 2-2. Roberto Di Matteo was again without John Terry through suspension, while Frank Lampard was injured, so Chelsea’s starting XI was as expected. Sir Alex Ferguson returned to more of a traditional Manchester United system after recent experimentations with a diamond. Ashley Young was the biggest surprise on the teamsheet, deployed out on the left. Manchester United went ahead on the counter as Chelsea dominated the first half, before the away side’s numerical supremacy led to dominance of the final 25 minutes.” Zonal Marking

“A frantic first half, followed by a more subdued second half. David Moyes was without Steven Pienaar so used Kevin Mirallas on the left, where he was the first half’s brightest player. Steven Naismith started on the right, while Marouane Fellaini returned behind the main striker. If looking for betting tips click here. In the absence of Glen Johnson, Brendan Rodgers fielded Andre Wisdom at right-back and Jose Enrique at left-back. Brad Jones was in for Pepe Reina. Liverpool stormed into a 2-0 lead, before Everton pulled it back to 2-2 shortly before half-time.” Zonal Marking

Jurgen Klopp
“Last season was truly memorable for Borussia Dortmund’s many supporters, as their beloved Schwarzgelben retained their Bundesliga title and also secured the first double in the club’s 103-year history by winning the DFB Cup too. Not only did they avoid the dreaded second season syndrome, but they actually did so in record-breaking style by setting the highest points total (81) and the longest unbeaten run in a single season (28 matches). Germany’s leading sports magazine, Kicker, compared this achievement with Bob Beamon’s “unbelievable” long jump record in the 1968 Olympics.” Swiss Ramble

“When Bafetimbi Gomis scored the only goal of the game against Brest recently, the French international striker raced behind the goal and plucked the head of Lyon’s club mascot – predictably, a lion – to add a little local flavour to his habitual prowling panther celebration. ‘I wanted to do something that would appeal to the fans,’ said Gomis.” ESPN

“Firstly, let me set the scene. It’s my first game from the Bolivian LFPB (Liga del Fútbol Profesional Boliviano) with Universitario de Sucre facing Oriente Petrolero, two teams languishing in the mid-table region of the Apertura half of the competition. Going in to the game, Oriente Petrolero had drawn a mind-boggling 8 of their 11 games, and had only lost once. Universitario were just a point better off but were playing at the Estadio Olímpico Patria, where they had a fine record.” In Bed With Maradona

“1. Same old, same old for the Reds. Manchester United’s breathless 3-2 victory at Chelsea on Sunday proved that as long as Alex Ferguson is the manager at Old Trafford, some things don’t change. It’s not that Ferguson has a particular flair for winning the big games, though he does win his share. Before Sunday, United had not won away in the league against its No. 1 rival in a decade. It’s not that United always plays good soccer. It has played awfully at times over the last couple of seasons. A Ferguson team is always competitive. When it has an edge, United usually punishes opponents. When things aren’t going well, Ferguson teams cling and let their opponents make a mistake. That’s what happened on Sunday.” SI