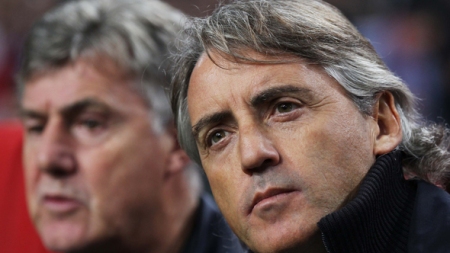 “In the past six years, Roberto Mancini has won three Serie A titles and the Premier League. In terms of major championships collected during that period, only José Mourinho can equal him. It is a formidable record and, based on that alone, Mancini should be hailed as one of the greats of his generation. Yet the suspicion lingers that he has just been fortunate, the right man in the right place at the right time. He took charge of Internazionale with the other big guns in Serie A weakened by the Italian match-fixing scandal. At Manchester City, he has had unprecedented resources. Look, his accusers say, at his record in the Champions League: in his first two seasons at Inter, Mancini’s side went out in the quarter-finals; in his next two, they went out in the last 16.” Lifes A Pitch

Why did Roberto Mancini make such an obvious tactical error?
“I’m not exactly a Pleat/Cox/Jack like brain when it comes to basic football tactics and formations, but this Tweet has been stuck in my craw since I read this morning. In a good way. As in, I agree with it. Yesterday, I posted a video in which David Pleat explained 4-2-3-1. Beyond the mechanics of the formation itself, Pleat mentioned a Jonathan Wilson truism: that the best tactics fit the team, not the other way around. To paraphrase THE BIBLE, ‘Formations were made for teams, not teams for formations.'” The Score

“The year of the blog? Very possibly, especially with the current batch of outstanding sites out there which have grown, improved, developed and cross-pollinated in recent time. Aided by social media, an increasingly specialised selection is out there, waiting for you to wade through and bolster your knowledge of the game, and I thoroughly recommend losing yourself in as many of the following as possible.” Guardian

Dortmund 2-1 Real Madrid: Dortmund press as a unit and expose Essien at left-back

“Dortmund bounced back from their weekend disaster against Schalke to record an important victory. After Saturday’s disaster against Schalke, Jurgen Klopp returned to something approaching his first-choice formation and XI, although Jakub Blaszczykowski remains unavailable. Jose Mourinho selected his expected starting XI. With Fabio Coentrao, Marcelo and Alvaro Arbeloa all out, Sergio Ramos and Michael Essien were at full-back. Sami Khedira only lasted twenty minutes before being replaced by Luka Modric.” Zonal Marking

“‘Fuera Borghi’ (Borghi out) was the message scrawled onto Chile’s Juan Pinto Durán training complex in Macul after the 3-1 defeat to Ecuador in the World Cup qualifier. Accompanied by ‘Vergüenza nacional’ (national shame) and ‘Ladrones’ (thieves), the message was clear: changes needed to be made as Borghi’s reputation had hit an all-time low amongst fans. The messages appeared after that defeat to Ecuador and before the game against Argentina. La Roja went out against Argentina like a team possessed; hunting down the ball when they didn’t have it and rampant when they did. They moved the ball, down the wings, at electrifying speed, bombarding the Argentina rearguard with crosses.” South American Football

“Max Merkel faced difficult and painful times after he was born in Vienna in 1918. Not only due to the political and economic struggles at the time, but also because of the fact that he just turned pro when the second World War broke out. This did not only change the lives of almost every European citizen, it also seemed to put the young Austrian’s career to an end. Shortly after the war, however the defender managed to win the league title with Rapid Vienna four times in eight years. The one time capped Austrian national team player ended his career in 1954 and started an impressive career as a Coach.” Bundesliga Fanatic