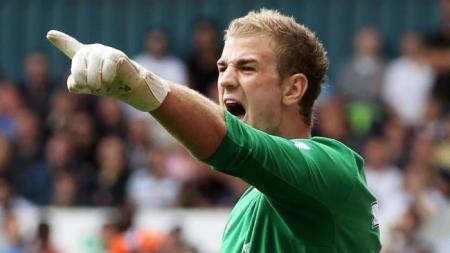 Joe Hart, Manchester City
“To change an old football cliché slightly, this was a season of two halves. The likes of Demba Ba and Jose Enrique were superb before Christmas but then faded badly, while Papiss Cisse and Paul Scholes had a superb impact but played only in the second half of the campaign. Then there are players like Lucas Leiva and Alejandro Faurlin, who excelled early on but saw their seasons end prematurely due to injury. This season, more than any other, highlighted the importance of consistency. With that being a crucial consideration, here is a Premier League team of the season, complete with two backups at each position.” ESPN

This Week in Mario Balotelli: The Spirit of a Champion

“Manchester City’s improbable Premier League title is a story of redemption. A few weeks ago City looked to have blown their chance at the trophy, blowing a sizable lead with a string of middling performances and dropped points. For the squad to end up with ultimate glory, they had to display a great deal of resolve and character. During much of that stretch, they played without enigmatic striker Mario Balotelli. Depending on who you ask, that was a positive rather than a negative. When we last left our hero, he had earned a red card (and really should have been sent off after about 20 minutes) in a 1-0 loss at Arsenal. His manager claimed he’d never play for the club again and essentially deemed him unmanageable. Pundits all over the globe said he wasn’t the kind of player who wins clubs titles.” The Classical (YouTube)

A season in statistics: the Premier League campaign in numbers

“Joey Barton doesn’t need legal aid but we typical Guardian do-gooders are going to give him free advice anyway. When he appears in front of the FA Committee of Investigation into Sustained Attacks on All and Sundry following the misunderstanding in Manchester on Sunday, Barton might try to curry sympathy among the powers-that-be by pointing out that Opta statistics show that, despite incurring a record-equalling nine red cards, Queens Park Rangers were the most fouled team in the Premier League this season. And Barton was their most fouled player.” Guardian