The Reducer, Week 36: You Take the Champagne

“This coming Sunday we will all be overwhelmed by an overwhelming amount of Premier League football. I’m seriously overwhelmed just thinking about it all. All the Premier League teams will take part in matches, all kicking off at the same time so that no competitive advantage can be had by any one club. We’ll get to Manic Sunday in a bit, but for now, let’s take a different kind of look at this past weekend’s proceedings: three snapshots of three goals in three games that hugely impacted the Premier League’s second-to-last weekend.” Grantland (YouTube)
The Reducer, Week 35: Manchester Civil War (YouTube)

Slav to the rhythm – A Balkan adventure – part 1

“It’s 1am and the train’s grinding on the rough rails is keeping me awake. We are chugging somewhere between Zagreb and Belgrade. We could be in Croatia, we could we be in Serbia. But we actually have no idea at all where we are. Conversations have moved on from about how this train is like the one on ‘Hostel’ to ‘what happened if they had a Saw-esque sadist on this train’..all the kind of conversations you want to have when you are in one of the remotest places in Europe with no mobile phone signal. The single 5 watt bulb is too dim for me to read my latest inductee into my sportbook review section, an excellent book called Danger, Kids! by Alan Moore which tells the story of an ambitious plan to re-unite Europe through football, a mission the carriage carries as its mantra for the weekend.” The Ball is Round: Slav to the rhythm – A Balkan adventure – part 1, Part 2

“Football suffers from anterograde amnesia. There tends to be an overriding trend amongst lovers of the Beautiful Game to live in the moment, focusing on the last match to evaluate the progress of an individual or a team. Harry Redknapp has been labelled as the nation’s saviour one minute before being described as an intransigent squad rotator who may have destroyed Spurs’ hopes of Champions League qualification the next. It is funny how a consecutive victories or defeats can shift public opinion so quickly. Athletic Bilbao have attracted unanimous praise for the way they have stylishly steered their way into the Europa League final against Atlético Madrid in Bucharest.” In Bed With Maradona

Lords of the dance 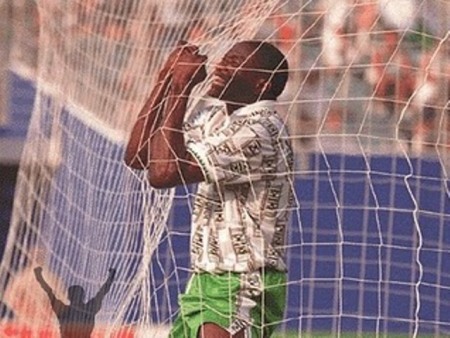 “Rashidi Yekini has died at a tragically early age, but in his all-too-brief time on earth he certainly left his mark. He will be remembered all over the globe not just for scoring Nigeria’s first ever World Cup goal (against Bulgaria in USA 94), but also – perhaps more – for the way he celebrated. One of the lasting images of the tournament is that of Yekini gripping the back of the net and then forcing his arms through the holes as he yelled out his thanks to the heavens. It was a beautiful moment because there was nothing contrived about it. It was a genuine, spontaneous show of deep emotion.” BBC – Tim Vickery

Dortmund must roll with changes for success in Champions League

“Borussia Dortmund has made a fine habit out of getting there first — whether the “there” in question is the ball or a particularly useful player. But for once, the new and old German champions will have to wait. Japanese midfielder Shinji Kagawa has told the club he will not decide on extending his contract (beyond summer 2013) until after the DFB Cup final against Bayern Munich on May 12.” SI

“Gus Poyet was recently remembering the advice he received when he joined Chelsea 15 years ago. ‘I had a team-mate at Zaragoza who had spent four or five years in England and he told me all the things that I shouldn’t do,’ he said to the Uruguayan press.” BBC – Tim Vickery