The Question: is Steven Gerrard good for Liverpool? 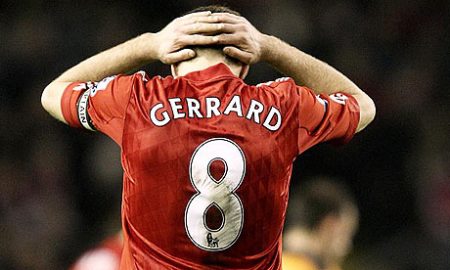 “When Steven Gerrard came off the bench against Newcastle United on 30 December and transformed a 1-1 draw into a 3-1 win, the assumption was that, with their talisman back after an ankle injury, Liverpool would kick on. That win took them to fifth and with Chelsea and Arsenal faltering, Newcastle seemingly beginning to feel the effects of their comparatively slender squad and Tottenham being Tottenham, a challenge for Champions League qualification, perhaps even third place, seemed probable.” Guardian – Jonathan Wilson

Win fails to paper over cracks

“Ludicrous, absolutely ludicrous. Liverpool’s Wembley warm-up consisted of an evening of engrossing ineptitude on as strange a game as even they, and even the beleaguered Blackburn Rovers, have endured in their surreal seasons. It concluded in suitably peculiar fashion as the outnumbered, the out of favour and the out of position somehow contrived to earn only a second win in ten league games.” ESPN

La Liga review: FC Barcelona 4, Getafe 0, Or, For Abidal, For Revenge, For The Four Points!

“In all my time as a football blogger and fan, I’ve seldom if ever have had to deal with a more frustrating man to predict than Pep Guardiola. Mathematically speaking, there are only so many combinations of players that he could conceivably play, and yet trying to guess his line-ups is a harder task than that of a defender trying to mark Messi.” The Offside (YouTube)

The Reducer, Week 32: City’s a Sucker

“Manchester United 2, Queens Park Rangers 1. Arsenal 1, Manchester City 0. In the 13th minute of Manchester United’s game with QPR at Old Trafford, a slashing Ashley Young felt a creaky, possibly arthritic old hand on his back. Considering the hand belonged to QPR defender Shaun Derry, who looks like he punches tree trunks for fun, it was a relatively light touch. And considering that Young was offside, Derry probably thought his contact would be forgiven by the wave of the linesman’s flag. But no matter; Young, in his first season playing with United, knew what he felt and knew where he was on the pitch. And he went down.” Grantland (YouTube)

A more mature Podolski set to prosper in Premier League

“It’s been a very good season for Bundesliga strikers. Bayern Munich’s Mario Gomez and Klaas Jan Huntelaar from Schalke 04 are head-to-head in the race for the leading goal-scorer trophy, with 23 league strikes each. (In all club competitions, the two of them have netted a combined 74 times so far). Polish attacker Robert Lewandowski has emerged as a key factor in Dortmund’s title challenge (17 goals) while Claudio Pizarro (Werder Bremen, 16 goals) and Martin Harnik (Stuttgart, 14 goals) is almost single-handedly keeping his team in contention for a Europa League spot.” SI

“Real Madrid dropped points at home despite dominating. Jose Mourinho gave a rare start to Raul Albiol against his former club, and played Karim Benzema on the right wing, with Angel Di Maria on the bench. Unai Emery was without Roberto Soldado, and made five changes to the side that drew with Levante last week. The centre-back duo of Victor Ruiz and Adil Rami, who have been excellent this season, was the only part of the side that remained in place. This match really should have had goals, with both sides missing big chances.” Zonal Marking