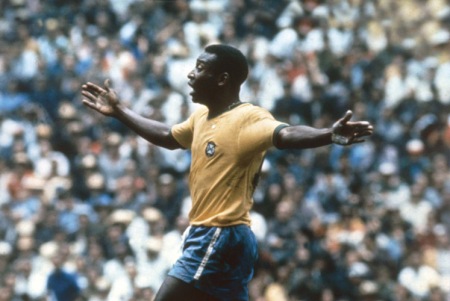 “It’s a short career, sports superstardom, which means that the world accumulates ex-great athletes at a fairly remarkable pace, one a year at least, as if time itself were an aging athlete out fielding fly balls — Elway, Sampras, Shaq, Ronaldo, thunk, thunk, thunk. At any given moment there’s a significant population of ex-sports superstars milling around in the weird background of culture, the part that’s half after-party and half wax museum. You could throw a dinner for them, the living retired great athletes, and fill a pretty good-sized hall. I’m picturing Yogi Berra trading fake punches with Muhammad Ali, MJ smoking scornfully in the corner booth. Maradona face-down in a cake.” Grantland – Brian Phillips

“Liverpool’s much-maligned record signing Andy Carroll went some way to justifying his huge price with the goal which put his side into their first FA Cup final since 2006 and ended the dreams of Everton in the all-Merseyside encounter at Wembley. The £35million striker had endured a testing afternoon, heading one straightforward chance wide, but came up with the winner four minutes from time at Wembley.” ESPN

Five points on Liverpool 2-1 Everton
“Liverpool fought back from 1-0 down to book their place in the final. Kenny Dalglish went with Andy Carroll upfront and Luis Suarez behind. Jordan Henderson started on the right of a four-man midfield, and at the back Jamie Carragher was selected at centre-back, which meant Daniel Agger moving to left-back. David Moyes selected Magaye Gueye on the left of midfield, Darron Gibson in the centre of midfield, and Phil Neville at right-back. This was a rather poor game lacking in technical quality – the goals came from two huge defensive mistakes and then a set-piece. There were a few individual areas of interest, however…” Zonal Marking

Liverpool 2 Everton 1: In-Depth Tactical Analysis
“This was to be the fifth FA Cup semi-final between the two Merseyside giants. Everton won the first (in 1906), but Liverpool have progressed through the last three. No other fixture in FA Cup history has seen more than three semi-finals. On all three occasions Liverpool have beaten Everton in an FA Cup semi-final, the Reds have gone on to lose the final. [not so keen on that one Mihail – time to end that sequence] Liverpool and Everton have been drawn together 16 times before in FA Cup history, with The Reds emerging victorious on nine occasions and the Toffees on seven.” Tomkins Times

Liverpool’s ‘work in progress’ must translate into Premier League success, starting at Anfield
“A record of only five home wins, as many as QPR and Blackburn Rovers, is too poor for a club with a proud European past and enduring Champions League ambitions. As Kenny Dalglish observed on the day Liverpool reached the FA Cup final by beating neighbours Everton 2-1, his team remain a ‘work in progress’. They won on Saturday but it was a semi-final long on noise but short on technical poise, Luis Suárez apart. Overall, Liverpool have the framework of a decent team.” Telegraph – Henry Winter

“The major change at Chelsea under Roberto Di Matteo has been the difference in the wide positions, stemming from a combination of the change of style, and the change of formation. Andre Villas-Boas wanted 4-3-3 and lots of pressing – therefore the job of the wide players was to close down the full-backs, and they defended high up the pitch. Villas-Boas then started playing with Juan Mata as a central playmaker, but the formation remained more 4-2-1-3 than 4-2-3-1 – a minor difference, but the wide players were still staying high up the pitch, even as Villas-Boas went from a heavy pressing game to something more cautious.” Zonal Marking 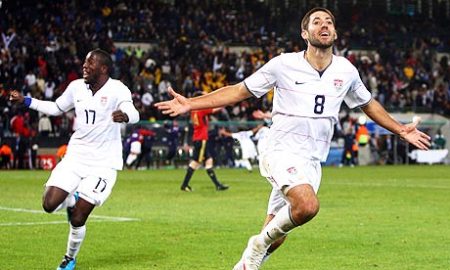 “Let’s come right out and say it: Clint Dempsey is having the best season ever by a U.S. international in Europe. With his late equalizer against Chelsea on Monday, the Fulham sniper now has 16 Premier League goals this season. The only Premier League players who have more goals in all competitions than Dempsey’s 22 are Robin van Persie, Wayne Rooney and Sergio Aguero.” SI

End of the road for Ronaldinho’s Flamengo

“While Europe’s Champions League is down to the last four, the South American equivalent, the Copa Libertadores, is whittling down its field to the 16 teams who will go into the knockout phase. Twelve places have so far been filled, with some high drama along the way. For a few sweet seconds, for example, Flamengo of Rio thought they had saved themselves from elimination.” BBC – Tim Vickery

“A late brace from Messi kept Barcelona in the title race for the La Liga ahead of the big El Clasico match up this coming weekend. Not at their best, Barca still managed to secure victory against a compact disciplined Levante side thanks to Leo and the strong backline.” The Offside