For better or worse? How Havelange’s global vision changed football

“Laid low by an infection, former Fifa president Joao Havelange is gravely ill in a Rio hospital, where no doubt he is profoundly irritated at being forced to interrupt his daily routine of swimming 1,000 metres. At the age of 95, Havelange remains a force of nature. Over 30 years ago he used his strength to change world football. When Premier League chairman Sir Dave Richards made his recent remarks about Fifa “stealing football from the English”, there can be little doubt that he had 1974 in mind. That was the year that Havelange unseated England’s Sir Stanley Rous to become Fifa president.” BBC – Tim Vickery

“Barcelona kept within six points of Primera Division pacesetters Real Madrid with a 2-0 home victory over Athletic Bilbao. With Madrid thrashing Osasuna 5-1 earlier in the evening Barca needed a victory to keep the pressure on Jose Mourinho’s men and they duly delivered thanks to goals either side of half-time from Andres Iniesta and Lionel Messi, who struck from the penalty spot.” ESPN

FC Barcelona 2, Athletic de Bilbao 0, Or, Play It Like It’s 2009!
“…It did seem like Pep had the Milan match in mind, as he played VV, Alves, Piqué, Mascherano, Adriano, Busquets, Iniesta, Thiago, Alexis, Messi and Tello; we were lucky that our one and only, precious, fragile LB was declared just hours before the match. In the bench, Pinto, Puyol, Keita, Xavi, Pedro, Cuenca and Montoya; Cesc was left out of the squad because apparently he has a small problem (back? left leg?) and Pep wanted him to be ready for Milan.” The Offside (YouTube)

“Papiss Cisse showed £35 million man Andy Carroll how to do it as Newcastle increased their advantage over Liverpool to 11 points. The Senegal international’s 19th-minute header set the Magpies on their way to a victory which leaves them in pole position to claim a top-six Barclays Premier League finish, and his second with 59 minutes gone sealed it. But on a black day for the visitors, keeper Pepe Reina was sent off nine minutes from time for head-butting defender James Perch, indicating as he belatedly left the pitch that he would resume their discussion after the final whistle.” ESPN

After changes, England in clueless state heading toward Euro 2012 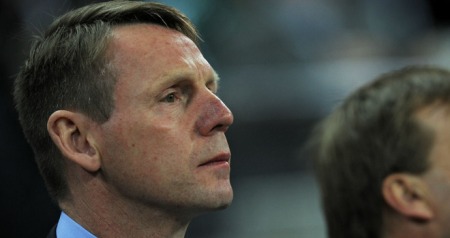 Stuart Pearce
“Plucky England, fighting back from two down only to be thwarted by a deflected last-minute winner. A brave effort from Psycho’s young lions. Pleasing fluency at times. The start of a bold new era for English football. … As a response to a single game played with a youthful side under a caretaker manager, such commentary made a certain sense. But the crucial thing to remember after England’s 3-2 defeat to Holland last Wednesday was context.” SI – Jonathan Wilson

A Turkish club for Turks…in Germany?

“Germany flagIzmirspor was founded by a group of Turkish immigrants in 1978, and by the time the club changed its name to Türkiyemspor in 1987, the club had risen meteorically to the Landesliga, then the fourth tier of German football.” World Soccer