Eight finals before the finals 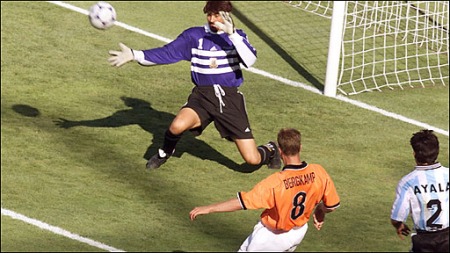 Dennis Bergkamp, Holland 2-1 Argentina, World Cup quarter-final
“A selection of eight games that really shouldn’t have been wasted on the earlier rounds of the tournaments they took place in.” SI

“Substitute Giampaolo Pazzini ensured Italy became the second team after Germany to qualify for next summer’s Euro 2012 finals as his late goal handed them a 1-0 win over Slovenia in Florence. The Slovenians had put up a brave fight before Pazzini, a 61st-minute replacement for Antonio Cassano, pounced five minutes from time to give his side an unassailable lead at the top of Group C. Serbia took full advantage to move into second place with a 3-1 stroll over the Faroe Islands in Belgrade with goals from Milan Jovanovic, Zoran Tosic and Zdravko Kuzmanovic, while Estonia are still in with a shout after ending Northern Ireland’s hopes with an impressive 4-1 win in Tallinn….” ESPN

“Sometimes soccer can seem a very simple sport. The great Dutch coach Rinus Michels, the father of the Total Football school of the late sixties and early seventies and the man who took that style of soccer to Barcelona, believed that his side should always play one more defender than the other team had attackers. If the opponent played three up, Michels liked four back; if two up, then three back. To an extent, that has been the theoretical orthodoxy ever since.” SI

When the Lions of Bilbao Met the Renengares of Budapest

“Football and war have had a strange relationship over the years and have often come together in the most unlikely of circumstances. One famous example is the now legendary (and somewhat mythical) First World War truce in no man’s land when despondent troops from opposing trenches supposedly stopped on Christmas day for a good-natured kick-about. There have been many other instances where football has been affected by war such as the time in 1938 when Liverpool Manager George Kay, along with dozens of top flight footballers, joined the Territorial Army in readiness for the inevitable conflict with Nazi Germany. When the war came many players hung up their boots and took up arms to fight for their country and inevitably some never returned.” In Bed With Maradona

Like the tube, football isn’t perfect – but we’re stuck with it

“Writing in The Guardian a couple of days ago, columnist Charlie Brooker bemoaned his inability to partake in the nation’s passion for sport, going through each major national pastime in turn and finding fault with almost every one. Football was quickly dismissed. He did not feel remotely like roaring with delight at the sight of a multimillionaire kicking a ball at a net.” Guardian

“Guided by a superb performance of playmaker Wesley Sneijder, Holland managed an eighth straight Euro 2012 victory by beating Finland by two goals. Smart exploitation of the space conceded behind the Finnish defensive line allowed a fair share of through ball, one of which was beautifully finished by Strootman, who scored his first international goal in an otherwise strong appearance.” 11 tegen 11