“Milan scored in the first minute and the last minute, to bookend a game otherwise dominated by Barcelona. Pep Guardiola used Sergio Busquets and Javier Mascherano at the back, with Seydou Keita in the holding role, in the usual 4-3-3. Max Allegri was without Zlatan Ibrahimovic, so Pato started upfront, supported by Antonio Cassano. Antonio Nocerino and Gianluca Zambrotta also started.” Zonal Marking

Last-gasp Milan snatches draw at Barca
“Barcelona conceded a goal after 24 seconds and another in stoppage time, opening its Champions League title defense Tuesday with a 2-2 draw against visiting AC Milan. Arsenal played to a 1-1 tie, stunned by Borussia Dortmund’s late goal. Pato opened the scoring for Milan and, after goals from Pedro and David Villa, looked to have put Barcelona in control, Thiago Silva’s header secured a point in Group H.” ESPN

Video – Barcelona 2-2 AC Milan, All The Goal Highlights
“A cracking match at Barca’s Camp Nou, featured a sensational start with Alex Pato 24 seconds in opening the scoring for visitors AC Milan. The 22-year-old Brazilian Pato raced clear of a static Barcelona back four, and slid the ball beyond keeper Víctor Valdés giving the Italian champions the earliest of leads.” Serie A Weekly

“A year ago, I spoke to Brazilian midfielder Sandro a few minutes after he had made his debut for Tottenham. I caught up with him again a few days ago as, recovering from injury, he watched his international team-mates train for last Monday’s international against Ghana at Craven Cottage in London.” BBC – Tim Vickery

“Red cards for both centre-backs didn’t help the away side, but Porto were in charge for most of the game anyway. Vitor Pereira is using the 4-3-3 system favoured by most of his predecessors. Kleber is Falcao’s replacement and James Rodriguez started on the left. Steven Defour played the right-sided midfield role. Mircea Lucescu’s XI was very similar from the side which impressed last season in the Champions League. Eduardo da Silva was used as an inverted winger on the right, with Douglas Costa on the bench and Jadson as the central playmaker.” Zonal Marking

“What could have been a landmark weekend in the seasons of three first-choice U.S. national team midfielders turned out to be nothing more than a wait-till-next-time occasion. Jermaine Jones remained an afterthought at Schalke despite not being moved during the recent transfer window; Michael Bradley failed to see the field in his first game as a member of Chievo Verona in Italy; and Stuart Holden’s anticipated comeback to Bolton’s first team was put on hold for at least another week.” SI

Sons of Bitches: Ultras and Maradonapoli 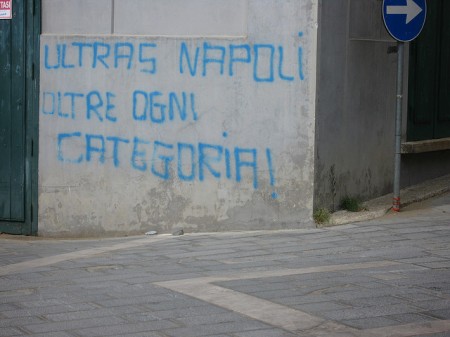 “While the 1982 World Cup victory created some temporary commonality among Italians the cracks were still there, evident in violence among increasingly extreme football fans. As Winston Churchill apparently quipped: ‘Italians lose wars as if they were football matches and play football matches as if they were wars.’ Inter-fan rivalries pre-dated Fascism’s take-over of the game and continued after the war, with a notorious match between Napoli and Bologna, in 1955, involving a pitch invasion and an exchange of shots between fans and police. Rarely premeditated however, crowd disorder was usually an impetuous, unplanned reaction to on-the-field events. This changed in the 1960s, with pitch invasions, violence and confrontations with the police reflecting and releasing society’s accumulated tensions.” In Bed With Maradona

“It is difficult to express the feeling among Manchester City fans when Arsenal’s stuttering form in the closing weeks of last season handed us third place and a spot in the Champions League group stages. For months the race had been about claiming fourth, and once achieved, the joy was tempered by the thought of a difficult qualifying round draw or, worse, a dismal August defeat in some low coefficient backwater. City’s only previous involvement in the top competition back in 1968 came to an end in two games and the guarantee that we’d be around long enough to enjoy it this time meant a wonderfully stress-free summer.” WSC

“It was another packed weekend in which Argentines around the world had a big say in footballing matters, so here’s another dose of Argentines Abroad. Sergio Agüero hit a hat-trick for Manchester City, Fernando Belluschi for Porto and Javier Pastore for PSG scored crackers (Pastore’s was his first for his new club), and there was plenty more besides. Read on for the action, and videos…” Hasta El Gol Siempre