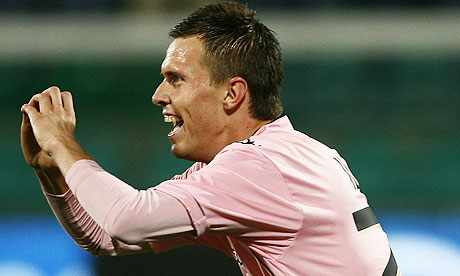 Josep Ilicic
“Palermo produced a great second half display to edge a thriller. Devis Mangia, Palermo’s new(est) coach, used a standard 4-4-2 system, a world away from the 4-3-2-1 that the club used last season. Josep Ilicic started out on the left, and Giulio Migliaccio played at centre-back. Gian Piero Gasperini used his favoured 3-4-3 system, which meant Javier Zanetti in an unusual centre-back role, Jonathan making his debut on the right, plus newcomers Mauro Zarate and Diego Forlan in the wide forward positions. Wesley Sneijder started on the bench.” Zonal Marking

Palermo 4 – 3 Internazionale
“Palermo struck twice late in the game to stun Inter Milan 4-3 in their Serie A opener at Stadio Renzo Barbera on Sunday night. With the game tied 2-2 with five minutes remaining, Fabrizio Miccoli put the hosts in front with a superb free-kick before substitute Mauricio Pinilla made it 4-2 two minutes from time. New Inter striker Diego Forlan reduced the deficit deep in stoppage time but Palermo held on for victory. Diego Milito had put the visitors ahead in the 33rd minute before Miccoli equalised shortly after the re-start.” ESPN

“This is the first article in a superbly in-depth two-part look at the Real Madrid side of the 1980s by Michele Tossani. Featuring interviews with the members of the famed ‘Quinta del Buitre’ , the first instalment charts the rise of the five young prodigies from Castilla hopefuls to first-team regulars.” The Equaliser – Part I, Part II

“It’s entirely conceivable that you are from a generation that never witnessed Kenny Dalglish’s first stint as manager at Liverpool in the 1980’s, not to mention his heyday as a player at Anfield and Parkhead. But the Scotsman oversaw a fine team and the 1988 vintage featuring Beardsley, Barnes and Aldridge was tremendous fun to watch. A hugely underrated side in our opinion, which was sadly denied the opportunity to challenge the AC Milan of Marco Van Basten due to a ban on English clubs in Europe at the time.” In Bed With Maradona

“Roberto Martinez picked a ball up from by his feet, rolled it across a tray of thick brown paint and tossed it across the field to Victor Moses. Moses stopped its flight with his chest and let it fall to his feet. He moved forwards with the ball, lifted his head and sent the ball arcing across the field at knee height. The paint lightly sprayed as the ball spun, tracing a curved line over the grass.” Run of Play

“Beautiful women, sweet oranges, 3000 tapas bars and Real Betis – that’s my kind of European Football Weekend. Forget your swimming with dolphins nonsense: a visit to the Estadio Benito Villamarín has been on my ‘things to do before I die’ list for years. Betis are a fun club; one with a fan base possessing an all important – to me anyway – self-deprecating sense of humour. Think Manchester City before the money started to roll in. It may have been the thick end of 40 degrees today, but that didn’t stop a mad Englishman and around 40,000 Béticos going out in the midday sun.” European Football Weekends

“When it comes to explaining Barcelona’s draw against Real Sociedad – which doesn’t seem so bad when you consider Pep’s Dream Boys still have more points than this time last year – LLL falls into line with Mundo Deportivo. ‘It wasn’t the ‘FIFA Virus’ or the wrong line-up, nor bad luck. Barça dropped two points in San Sebastian because they fell for the old sin of complacency,’ writes Joan Poquí.” FourFourTwo