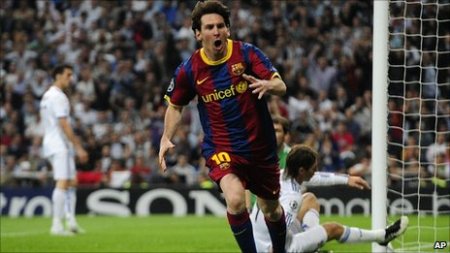 “Lionel Messi scored a poacher’s strike and then a superb solo effort to give Barcelona a major advantage in the tie. Jose Mourinho named his expected side – Lassana Diarra was in for Sami Khedira, whilst Raul Albiol came in for the suspended Ricardo Carvalho. Pep Guardiola also chose the side expected in the preview. Carles Puyol returned from injury to fill in at left-back, whilst Seydou Keita replaced the injured Andres Iniesta. The game was scrappy, dirty and not particularly pleasing on the eye. For much of the contest, the objective of both sides seemed to be to get opposition players sent off, rather than actually try to score a goal. Tactically, it wasn’t fascinating for long periods.” Zonal Marking

Jose Mourinho claims Barcelona benefit from refereeing conspiracy after stormy Champions League loss
“Mourinho made mention of four officials: Anders Frisk, who he claimed received a half-time visit from Frank Rijkaard, the then Barcelona coach, in 2005; Tom Henning Ovrebo, who turned down a succession of Chelsea penalty claims against Barcelona in 2009; Massimo Busacca, who sent off Arsenal’s Robin van Persie at Camp Nou this season, and Wolfgang Stark, who showed a red card to Real’s Pepe on Wednesday. Mourinho was also expelled.” Telegraph – Henry Winter

Real Madrid 0 Barcelona 2: match report
“Two moments of beauty stood out amidst the beastliness of the Game of Shame last night. Two moments of magic from Lionel Messi, his second goal echoing Diego Maradona’s dribbled gem against England in 1986, rescued this match from the dark ages. Clasico, crasico. But for Messi remembering that football should be about joy, adventure and imagination, and Xavi also playing with style, this was the game that dignity forgot. There was no respect, no charm, no integrity.” Telegraph – Henry Winter

Messi puts Barca on brink of Wembley
“Lionel Messi struck twice late on as Barcelona took a huge step towards the Champions League final with a 2-0 semi-final, first leg win over 10-man Real Madrid at the Bernabeu. Messi, taking his tally to 52 in all competitions this season, netted in the 76th and 87th minutes – the second a typically brilliant solo effort – to settle an ill-tempered clash which saw Madrid defender Pepe sent off in the 61st minute.” ESPN

Barcelona and Real face UEFA action
“Both Barcelona and Real Madrid will face disciplinary proceedings from UEFA after their tempestuous Champions League semi-final first-leg tie at the Bernabeu. Barcelona won the game 2-0 thanks to two goals from Lionel Messi, but the clash was littered with unsportsmanlike behaviour, diving and fights. After the match, Real boss Jose Mourinho (who had been sent to the stands during the game for comments made to the fourth official) then launched into a tirade about the influence that the Catalan side have over European football.” ESPN

Negative Soccer Mars Real Madrid vs Barcelona Semi-Final
“Thank goodness the embarrassing spectacle of Real Madrid against Barcelona in the Champions League was played out in the semi-final of the tournament instead of the finale. The first leg of the semi-final was an example of everything that people hate about soccer. Barcelona players crowding the referee on several occasions to influence his decision. Players exaggerating contact. Poor refereeing decisions. The referee stopping and starting the game seemingly every few minutes. Off the pitch pushing and shoving. This is not what soccer is about. This was anti-soccer.” EPL Talk – Video

Champions League press reaction: ‘Mourinho has perverted history’
“If José Mourinho was feeling disgusted after Barcelona’s controversial 2-0 victory over his Real Madrid team, the Spanish press contained little to soothe his feelings. While figures from both sides offered predictably opposed views about the dismissal of Pepe which had such a major effect on the Champions League semi-final first leg at the Bernabéu, most commentators took a dim view of the Portuguese coach’s approach to the game and his complaints afterwards.” Guardian

This entry was posted on Thursday, April 28th, 2011 at 6:27 pm and is filed under Champions League, FC Barcelona, Football Manager, Henry Winter, Real Madrid. You can follow any responses to this entry through the RSS 2.0 feed. You can leave a response, or trackback from your own site.