“Francesco Totti was the hero again, scoring a chipped penalty and a 94th minute winner. Gokhan Inler was suspended for Udinese, so fellow Swiss international Almen Abdi took his place. Alexis Sanchez was initially named in the starting XI, but a late injury meant he dropped out of the side, with German Denis coming in. Vincenzo Montella was without Philippe Mexes, Jeremy Menez and Julio Sergio. Aleandro Rosi started on the right, with Matteo Brighi ahead of David Pizarro and Daniele De Rossi in the midfield trio.” Zonal Marking

Valencia 5-0 Villarreal: spare man at the back, and direct football going forward
“Third-placed Valencia demolished fourth-placed Villarreal at the Mestalla. Unai Emery brought Ever Banega back into the side in the centre of midfield, and also recalled Portuguese defenders Miguel and Ricardo Costa at the back. Juan Carlos Garrido was forced to change things at the back, after the news that centre-back Gonzalo Rodriguez is out for the rest of the season with a broken leg. He gave a rare start to Kiko, resisting the temptation to move Carlos Marchena from his ‘new’ central midfield position.” Zonal Marking

Hamburg 1-1 Dortmund: late equaliser snatches a point for the leaders
“Jakub Blaszczykowski scored a thunderous volley in stoppage time, so Dortmund’s lead now stands at five points. Michael Oenning brought back Ruud van Nistelrooy and David Jarolim into his starting XI, playing a 4-1-3-2 formation. Jurgen Klopp played his expected XI – unchanged from the previous weekend’s win over Hannover, and with the exception of long-term injury victim Shinji Kagawa, this was the standard starting line-up throughout the season. This was a decent game – the entertainment value game from the tension and the importance of Dortmund’s result, however, rather than any great technical quality or major tactical interest.” Zonal Marking

Will Piazon stand out at Stamford Bridge?

“Have Chelsea done a good deal acquiring Sao Paulo striker Lucas Piazon, who joins the club next year when he turns 18? Sao Paulo are certainly happy. The deal enables them to sell a player who has yet to appear in their first team, bring top-class centre forward Luis Fabiano back to the club – he scored 118 goals in 160 appearances for Sao Paulo between 2001 and 2004 – and still have some money left over.” BBC – Tim Vickery 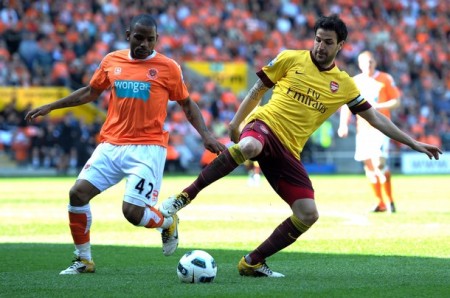 “If this win is to re-ignite Arsenal’s title challenge – a title challenge which had threatened to actually descend into ‘considerable disappointment’ – then it is probably apt that it was a game which displayed Arsenal’s season in a microcosm that invigorated them. Arsenal were exuberant in attack for most parts, picking off Blackpool’s courageously high backline with ease but were profligate in attack; and that, coupled with a sudden inexplicable nervousness, contrived to throw open the game.” Arsenal Column

“Twenty-five games played for twenty-three victories and two draws, a balance sheet better than Barcelona’s one, the Liga Sagres’ title already won even though there are five games left, a Europa League quarter-final to play and a manager who walks into Mourinho’s footprints… All these reasons make the tactical analysis of Porto’s tactics quite relevant, the Villas Boas’ one, who became the youngest manager to win the championship’s title on Sunday night. Moreover in Lisbon after a victory over Benfica. What else?” Panenka

“It is high noon in Vienna, May of 1990. Benfica is scheduled to play the great Milan side of Baresi, Rijkaard, Gullit, van Basten and Sacchi the following day for the European Cup. A man kneels beside a gravestone and murmurs a few words with a light, weeping voice. He stands and leaves with a glance that combines both anguish and love. The name on the gravestone is that of Béla Guttmann. The weeping man goes by the name of Eusébio da Silva Ferreira.” The Equaliser