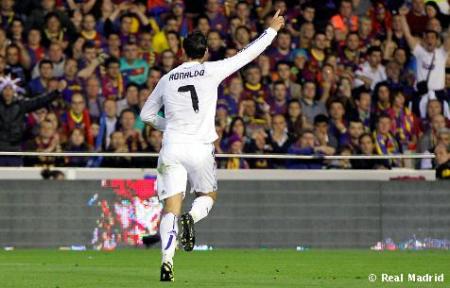 “A tight, scrappy game was won by Cristiano Ronaldo’s 103rd minute goal. Jose Mourinho had to reshuffle his defence with Raul Albiol suspended. Sergio Ramos moved into the centre, and Alvaro Arbeloa came in at right-back. Mourinho also chose to play no true striker – Karim Benzema was dropped with Mesut Ozil back in the side on the right. Ronaldo started ufpront.” Zonal Marking

Real Madrid Lay Hands on the Copa del Rey
“Less than a week after their hard fought tie in league play, Madrid and Barça met in the final of the King’s Cup. Mourinho sent his defensive set into the midfield again, then put in Özil from the start for an added touch of creativity in attack, and sprinkled the whole side with an extra dose of aggression dust.” Cult Football

Jose’s Barça-Bothering Continues in Cup
“The notion that there is a ring-bearing, hairy-toed, mystical, ‘I love you Master Frod’ friendship surrounding World Cup winners was firmly dispelled in Valencia in Wednesday’s Copa del Rey final. Ten of those who triumphed in South Africa came face to furious face in Mestalla and spent a wonderfully ill-tempered 120 minutes kicking and stamping each other along with generous volleys of insults thrown in for good measure.” Football 365

“The Copa Libertadores can seem like a slow burner, but it is about to catch fire. The final group games are taking place in South America’s equivalent of the Champions League. Next week, the 16 remaining teams kick off the knockout stage. Come June 1, just two are left standing — and it is a fair bet that one of them will be from Brazil. In the last 20 years, only three times has the final not featured a Brazilian club.” SI Tim Vickery 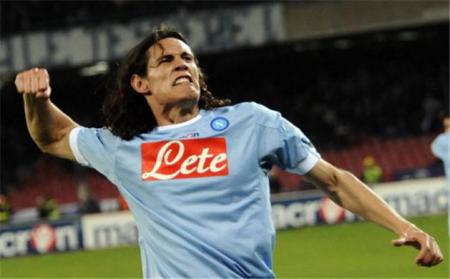 “Despite a disappointing home defeat to Udinese last Sunday, this has still been a great season for Napoli, who currently lie second in the Serie A league table with five games remaining. Even though the scudetto is now probably beyond them, there’s still a slim chance that they could catch the leaders Milan, while qualification for the Champions League looks more than likely. The team has played its football at a fast tempo and with the intensity typical of manager Walter Mazzarri, a shrewd tactician and a powerful motivator, which has delighted the club’s passionate supporters.” Swiss Ramble

“If Tottenham are to challenge at the top level consistently, they need complement their British directness with a bit of continental flair. And it’s safe to say that, in their inaugural year in the Champions League, Rafael van der Vaart has helped to provide that. Against Arsenal, the Dutchman rediscovered his best form after it, like many of his peers nominated for the PFA player of the year award, took a dip after the New Year but he was inspirational at White Hart Lane as Spurs came back from behind to draw 3-3.” Arsenal Column

“For their rivals in the French title race, the manner in which Marseille have muscled their way into position in recent weeks bears an ominous trace of déjà vu. Just as they did last season, when they ended an 18-year wait for the Ligue 1 championship, Marseille are steadily grinding out results while their opponents flounder. The 2-1 comeback victory at Montpellier on Sunday enabled Didier Deschamps’s side to close to within a point of wobbling leaders Lille, held to a 1-1 draw by Bordeaux the day before. Third-place Lyon, meanwhile, saw their title ambitions hit in a 1-0 defeat at Paris Saint-Germain that left them six points off the pace with seven games remaining.” Football Further