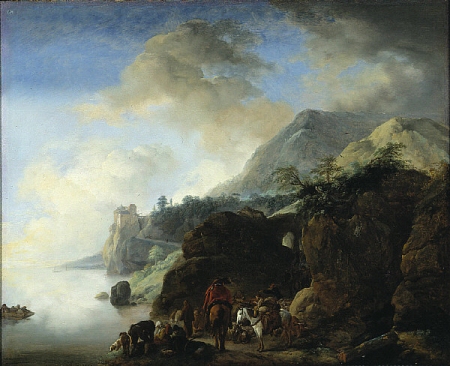 Travelers Awaiting a Ferry, Philips Wouwerman
“Despite overtures to delicacy, Barcelona FC has become an unwieldy force, a football leviathan. Coinciding with the city’s international debut in the ’92 Olympics, the club began two decades of furious attack on Real Madrid’s hegemony over Spanish football with championships in La Liga and the Champions League, with Super Copas and thrashings at the Bernabéu. Their popularity among passing fans and football writers has swelled and their influence seems ubiquitous: it’s a small step from the club’s success to the success of the Spanish side in the 2008 Euro Cup and 2010 World Cup; their mind-boggling sextuplet of championships in 2009 persuaded Real to spend record amounts assembling a team dubbed ‘galactic’.” Run of Play

Real Madrid v Barcelona: tactical preview
“Barcelona have an eight-point gap going into the second of five Clasicos this season. No-one needs reminding what happened in the previous fixture between these two sides. The 5-0 was a truly historic result, and the heaviest defeat of Jose Mourinho’s managerial career. Mourinho has a reputation for learning from his mistakes, though – his Inter side were outplayed by Barcelona at the Camp Nou in early 2009/10, but he returned in the semi-final to record an unlikely victory.” Zonal Marking

“This old chestnut is revived thanks to David Anderson of the Daily Mirror, who wrote a peach of a piece this week; taking nonsense to new heights. After all, wasn’t it about time someone wrote a piece criticing Rafa Benítez, for no apparent reason? Here he tells us of the folly of playing Dirk Kuyt out on the wing, after he scored a great goal playing … out on the wing.” Tomkins Times