Squad Numbers – Are They Important? 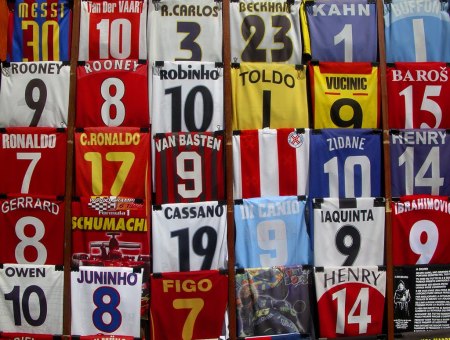 “Ever since I became an addict of football management simulations on the computer I have always taken great pleasure in assigning the appropriate numbers to the players of my inherited team. This unhealthy obsession has unsurprisingly transferred itself over to real life. I find myself getting worked up when a defender is given a number that should be allocated to a forward player or when a player is given a squad number in the high eighties when there are only twenty or so professionals on the wage bill. Perhaps the real reason I am devoting this column space to such a subject is to try and find out if I am alone in the football supporting world or not.” (Just Football)

“James Richardson is joined by Sean Ingle, Rob Smyth and Paul Doyle. On the pod this week: • The team are joined on the phone by Raphael Honigstein to reflect on the death of Robert Enke. • A full World Cup play-off preview. • Brian Oliver drops by to discuss the African World Cup qualifiers and reminisce about the infamous Egypt v Algeria game from 1989. • And Sid Lowe is on the line to preview Spain’s friendly against Argentina.” (Guardian)

The truth behind Benitez

“He has won the Champions League, but only one of his last nine fixtures. He still appears adored by many on the Kop, but is derided by still more on messageboards and phone-ins. He is one of the most divisive figures in football. But how many of the criticisms commonly levelled at Rafa Benitez stand up to analysis?” (ESPN)

Why are there so few black football managers?

John Barnes
“An interesting piece here from Matt Slater. Sadly, this isn’t a new piece. In 2004, the BBC wrote a similar piece. The piece said then that one in four football professionals was black yet there were only three black managers. Since the breakthrough players of Viv Anderson, Cyrille Regis, Lawrie Cunningham and so on there have been a number of generations of black players come through the ranks.” (Left Back In the Changing Room)

What we can learn from Rooney, Dan Rooney
“Perhaps the worst row I’ve had in my scribbling career came when a press officer at a Premier League club accused me of racism. We had written a story about whatever issue everybody was talking about that week and buried the launch of an anti-racism rap that had been recorded by a couple of the team’s players. To give that story secondary importance was racist, the PR man claimed. I disagreed and tempers flared.” (BBC)

Super San Siro primed and ready for All Blacks
“San Siro. Or, Stadio Giuseppe Meazza, if you prefer. As it looms into view along Via Patroclo, it makes famed rugby grounds like Ellis Park or Millennium Stadium look more like the local town domain. Eleven concrete towers, all 50m high, loom above the third tier of seating to prop up the distinctive roof of red girders which ominously cuts the skyline.” (NZHerald)

“It often ends in tears and it’s never, ever, easy. Yes, we’re talking about England’s World Cup qualifying campaigns, and we kick off the list with our efforts to get to Spain in 1982…” (midfielddynamo)

Memories Of Football Ground Spotting In The UK

“After viewing photographs in The Guardian last week about the greatest number of league grounds that can be seen on a single train trip in Great Britain, the feature got me thinking about my life growing up in Wales.” (EPL Talk)