Premier League round table: Who can challenge City? Which teams should fear drop? What would make you happy? 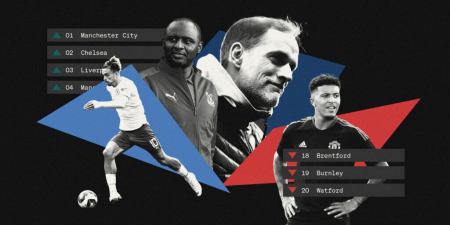 “In two days’ time, the Premier League is back. Promoted Brentford kick things off by hosting Arsenal at their shiny new stadium on Friday night and the first weekend of fixtures also treats us to Harry Kane-admiring Manchester City against Harry Kane-owning Tottenham Hotspur on Sunday afternoon. City are the team to beat after coasting to the title in 2020-21, so who are the teams that are going to challenge them? Which clubs should be looking over their shoulder in the bottom half of the table? And who are you most looking forward to watching this season? We asked four of our writers to answer those questions and more, as we ramp up our Premier League content before the 2021-22 season gets underway…”
The Athletic
BBC – Premier League predictions: Who will finish where in 2021-22?
Guardian – Back in the game: here comes the Premier League again

This entry was posted on Thursday, August 12th, 2021 at 9:40 pm and is filed under Arsenal, Chelsea, FC Liverpool, Manchester City, Manchester United. You can follow any responses to this entry through the RSS 2.0 feed. You can leave a response, or trackback from your own site.