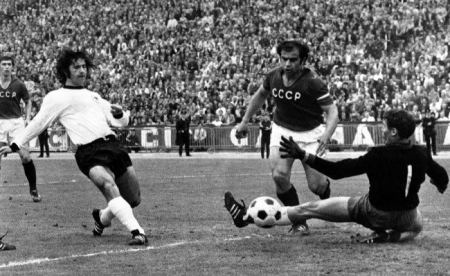 “The UEFA Euro 1972 Final was a football match played at Heysel Stadium in Brussels, Belgium, on 18 June 1972, to determine the winner of the UEFA Euro 1972 tournament. It was the fourth UEFA European Football Championship final, UEFA‘s top football competition for national teams. The match was contested by West Germany and two-time tournament finalists, the Soviet Union. En route to the final, West Germany finished top of their qualifying group which included Turkey, Albania and Poland. After beating England over a two-legged tie in the quarter-finals, they progressed to the final after defeating tournament hosts Belgium in the semi-final. The Soviet Union won their qualifying group which included Cyprus and Spain, before beating Northern Ireland in the two-legged quarter-final and Yugoslavia in the single-match semi-final. …”
Wikipedia
EURO 1972: all you need to know (Video)
YouTube: West Germany v USSR: 1972 UEFA European Championship final highlights

This entry was posted on Tuesday, July 27th, 2021 at 11:38 pm and is filed under Belgium, Europe, Germany, Russia, UEFA. You can follow any responses to this entry through the RSS 2.0 feed. You can leave a response, or trackback from your own site.