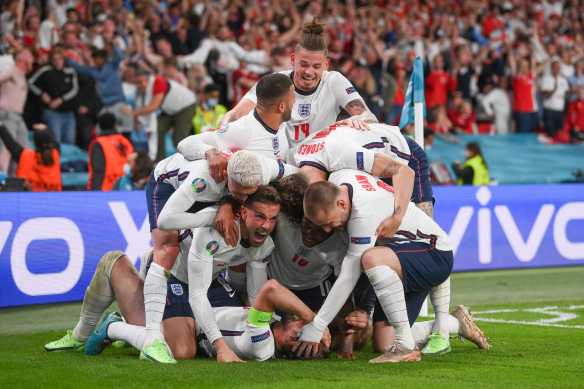 “Harry Kane tied Gary Lineker’s record for the most combined England goals at European Championships and World Cups, but his extra-time winner against Denmark came with huge controversy. Raheem Sterling dashed through Denmark’s defence in extra time of the Euro 2020 semi-final and went down in the box after what appeared to be minimal contact. But the referee still pointed to the spot and although Kasper Schmeichel saved Kane’s penalty, the England captain buried the rebound to send the Three Lions to the final with a 2-1 win. …”
Goal
England 2-1 Denmark: A final at last as England get that little bit of luck that’s been missing for 55 years
Ignore the Kane penalty controversy: Southgate’s England deserve their shot at Euro 2020 glory
NY Times – Euros 2020: Highlights From England’s Triumph Over Denmark
BBC: England v Denmark – how you rated the players