Premier League: 10 things to look out for on the opening weekend 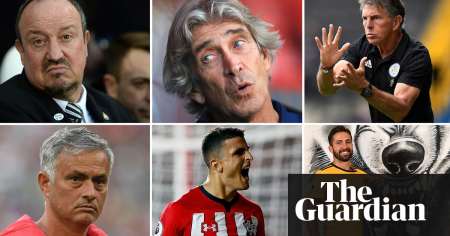 Clockwise from top left: Rafael Benítez, Manuel Pellegrini, Claude Puel, João Moutinho, Mohamed Elyounoussi and José Mourinho.
“1) Manchester United and Leicester need to start brightly. José Mourinho and Claude Puel are under more pressure than most to start the season strongly. Both have large numbers of sceptics among their club’s supporters, and doubts also persist about the popularity of their methods with players. So both managers need their teams to perform brightly as soon as the season kicks off in order to lift the mood. …” Guardian

This entry was posted on Friday, August 10th, 2018 at 10:52 pm and is filed under Arsenal, Chelsea, FC Liverpool, Manchester City, Manchester United. You can follow any responses to this entry through the RSS 2.0 feed. You can leave a response, or trackback from your own site.