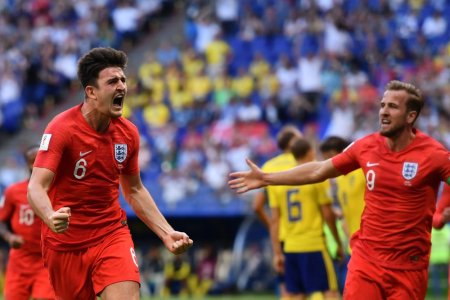 “On Saturday, as England’s soccer team swept aside Sweden to reach the World Cup semi-final, Britain’s government were holed up at Chequers, a sixteenth-century, wood-paneled manor in the Buckinghamshire countryside traditionally occupied by the prime minister, scrabbling for a Brexit negotiating position Brussels might not immediately laugh out of town. … English World Cup campaigns normally follow a familiar pattern, from hype through disappointment to righteous public indignation at overpaid, and underperforming, players. This year has been different. Despite the usual prurience from tabloids, including a borderline racist obsession with a tattoo belonging to forward Raheem Sterling, the English public is, overall, ebullient and invested in 23 young men who have, even before their clash with Croatia on Wednesday, outstripped almost all expectations.” New Republic

This entry was posted on Tuesday, July 10th, 2018 at 6:52 pm and is filed under England, Europe, World Cup 2018. You can follow any responses to this entry through the RSS 2.0 feed. You can leave a response, or trackback from your own site.