Neymar Can’t Quite Copy Cruyff, Football Might Really Be Coming Home, and More Takeaways From the World Cup Quarterfinals

“1. European dominance continues. When Germany won the 2014 World Cup, it was the first time any continent had produced three-straight World Cup winners. And after the elimination of Brazil and Uruguay on Friday, that streak will now extend to four. In 2002, it seemed like we might be seeing a challenge to world soccer’s established hierarchy. Senegal and the United States both made the quarterfinals, while South Korea and Turkey both advanced to the semifinals. Of course, it ended with Brazil and Germany, the two all-time great soccer-playing nations, in the final, but even that was something of a surprise, as they were ranked 11th and 10th, respectively, in the pre-tournament Elo Ratings.” The Ringer (Video)

“Set-piece frailties could play into England’s hands.  Luka Modric flagged up a weakness for Croatia without being asked. ‘We watched the [England] game today, we saw how good they are from dead-ball situations. We have to improve that element of our game.’ Freeze-frame Russia’s late equaliser from a free-kick and it is alarming just how much space Croatia gave their opponents. Seven of the 10 Croatia players in the area took up extremely deep starting positions, almost on the edge of the six-yard box. Just as significantly, none of them were ‘touch-tight’ on any of the Russian players.” Guardian

Pressing Issues at the World Cup

“One of the tactical questions heading into the World Cup was whether the modern popularity of pressing at club level would be replicated on the international stage. The best pressing teams are a meld of intelligent positioning and trigger movements, honed during hours on the training pitch, requiring intense and sustained athletic performance.” Stats Bomb

Russia Finally Falls, Leaving a Trail of Admirers and Doubters 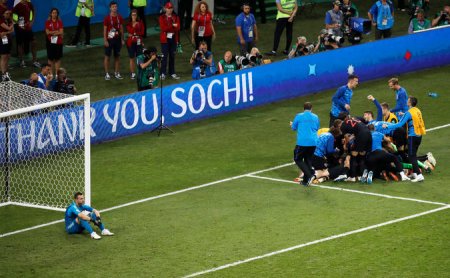 “It was only a couple of minutes to midnight, and Miroslav Romaschenko did not want to leave. As Croatia’s players bounced around in ecstasy and as Russia’s collapsed, disconsolate, onto their backs, the losing team’s assistant manager sat down, frozen in place on the Fisht Stadium’s turf. He stayed there, staring into space, as the Croatian captain, Luka Modric, leapt into the crowd, celebrating his country’s second-ever World Cup semifinal; as both teams sought out Fyodor Smolov and Mário Fernandes, the two players whose missed penalties brought Russia’s tournament to a close; and as the fans turned to leave, back to the beach, back to the bars, back to reality.” NY Times

“Brazil entered the 2018 World Cup as one of the favorites thanks to their athletic and/or defensively astute central midfielders Casemiro, Paulinho, and Fernandinho, and the fearsome left-sided trio of Marcelo, Coutinho, and Neymar. Understanding the threat the latter threesome posed, Belgium manager Roberto Martínez instructed his side to overload the right section of their midfield. This ploy forced the three tricksters to play through clogged spaces or switch play to the under-supported Willian. Eventually, the difficulty of building these types of attacks led to losses of possession that Belgium looked to convert into dangerous counter-attacks; Hazard and Lukaku led the way in this department with their dribbling, hold-up play, and aerial duels. This strategy, along with a handy own goal, provided Belgium with a two-goal cushion – something they held onto for dear life as Tite’s second half adjustments allowed Brazil to created chance after chance in a valiant losing effort.” Outside of the Boot (Video)

Fear of a Black France

“I was born in the late 70s of a mother from Martinique and a father from Lorraine region in Eastern continental France: I was always aware that, for good and bad, France was more than white, more than Europe, more than what most thought and took for granted. I looked to history to make sense of the very existence of my family, and the history I found was a history of exploitation, slavery, abuse ignored by most French people.” Africa is a Country