Anatomy of a Goal 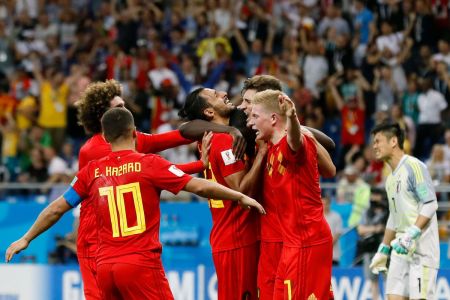 “… Those words are true of every goal—the ugly ones and the pretty—but were perhaps never more honest than after witnessing Nacer Chadli’s last-minute stunner to complete Belgium’s 3-2 comeback win over Japan on Monday. Despite dominating the majority of the match, the Red Devils found themselves facing a two-goal deficit, and time was acting against them. The Japanese goals were each stunning in their own rights. Genki Haraguchi caught the end of a through ball and threaded it past a diving Thibaut Courtois in the 48th minute. Four minutes later, Takashi Inui found a window in a sea of Belgian defenders and unleashed a shot that touched the back of the net before a diving Courtois hit the ground.” The Ringer (Video)

This entry was posted on Wednesday, July 4th, 2018 at 11:03 pm and is filed under Belgium, World Cup 2018. You can follow any responses to this entry through the RSS 2.0 feed. You can leave a response, or trackback from your own site.