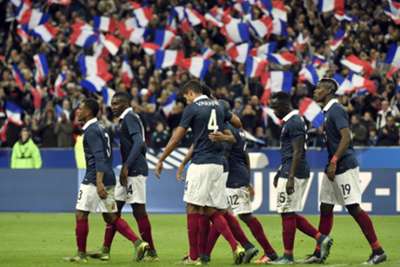 “The 2016 European Championships draw was made in the Palais des Congres in Paris Saturday. UEFA president Michel Platini was not present—he is currently suspended from his duties by FIFA—but there was support for the Frenchman when footage of player-turned-politician helping France win Euro 1986 was met with applause in the draw auditorium. It was Platini who instigated this new-look Euros format: there are now 24 teams in the tournament, eight more than in previous competitions.” SI (Video)

Bright Future: Liverpool are a team of players still yet to hit peak age

“There was a stark reminder of just how young Liverpool’s current squad is when the players headed towards the Kop, hand-in-hand, saluting supporters after their 2-2 stalemate with West Bromwich Albion. Apart from Martin Skrtel and James Milner, the other nine players who embraced the Reds’ supporters at Anfield last weekend were largely fresh-faced and youthful, still learning their trade in the game. Jordon Ibe (20), Divock Origi (20), Roberto Firmino (24), Alberto Moreno (23) and Emre Can (21) were amongst the line of players who greeted fans after the full-time whistle, all of whom are under the age of 25.” Squawka

Tactical Analysis – Liverpool 2 WBA 2
“Klopp made only three changes following the midweek Europa League clash with Sion. None was a surprise, with Moreno and Benteke replacing Smith and Origi and Coutinho, coming back from injury, replacing Firmino who was given the break his recent displays suggested he is in great need of. Pulis’ WBA presented even less of a surprise in their starting XI. Gardner was expectedly chosen to replace the injured Sessegnon down the right flank. This was the only change as although Yacob was in line to make his comeback following a one-game suspension, he had to miss the game due to compassionate leave for bereavement. As such Olsson remained at centre-back with Evans ahead as the team’s defensive midfielder.” Tomkins Times

Tactical breakdown: How Ranieri’s Leicester City has overtaken the EPL

“Leicester City sits on top of the Premier League table after 16 rounds in one of Europe’s biggest stories nearly halfway through the season. New manager Claudio Ranieri has sharpened Leicester’s focus, harnessing his players’ scrappiness to become a formidable defensive side paired with England’s in-form striker, Jamie Vardy. Unlike its results, the team’s tactics are fairly typical. The Foxes line up in a standard English 4-4-2, with Riyad Mahrez’s tendency to drift inside and next to the front two passing as their most complicated wrinkle.” SI

Premier League Diary: How Louis Van Gaal will be run out of Manchester United next weekend

“Another weekend, and another weekend of the purest guff. It is quite hard to describe how useless Manchester United is, but only because the depth of the team’s woefulness has already been stated. Repeatedly. There is, admittedly, an infinite combination of all the thousands of words in the English language, and many of those combinations could be deployed to describe how utterly rubbish at football they are. But the problem is that Manchester United is infinitely awful. With each game they find a new way to be awful, while dredging up all the ways in which they have also recently been awful. They are operating with a checklist of cack, and ticking off the boxes with every match, and then drawing another box at the bottom, and annotating it with a new disaster. Then they check that, and the player checking it goes down with a thigh strain.” Fusion 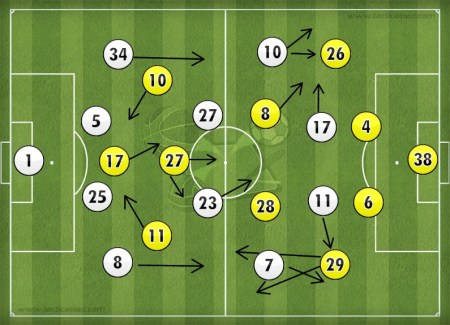 “The two leaders of the chasing pack came head to head in this encounter. Both teams were galvanised by Gladbach’s shock 3-1 victory over runaway leaders Bayern Munich and were eager to close the gap on the Bavarians. Despite Wolfsburg’s phenomenal home record prior to this game (29 league games unbeaten), Thomas Tuchel’s reinvigorated Borussia Dortmund side were many people’s favourites going into this game with striker Pierre-Emerick Aubameyang in lethal form with 17 goals in 14 Bundesliga matches. Both sides were without key players, Wolfsburg were unable to rely on Dante who was absent through suspension while BVB were missing centre-back Mats Hummels who was replaced by Sven Bender; a peculiar decision at first but one which seemed to make more sense as the game wore on and proved to be problematic for Wolfsburg.” Outside of the Boot

Are Manchester United and Arsenal Getting Lucky?

“There are many ways to look at the effectiveness and reliability of a team but when you find a metric related to scoring goals that places them on the edges of historical parameters or beyond it pays to take notice. Both Man Utd and Arsenal sit perilously close to the positive edge of measures that surround the levels of good chances they have been creating and allowing as we shall soon see.” Stats Bomb

“We begin this week’s installment of the Diary by returning to the wisdom and knowledge of an old, old friend. One who may not be managing in the Premier League any more, but who is always managing in our defensive, negative, rigorously well-structured hearts. We speak, of course, of Rafael Benitez.” Fusion