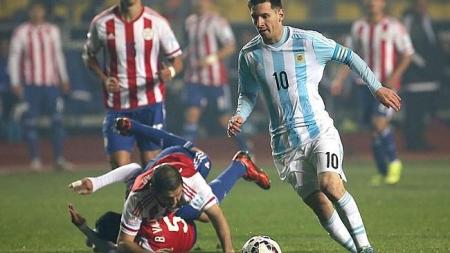 “There was no goal for Lionel Messi, but there was everything else in Argentina’s 6-1 win over Paraguay in the Copa America semifinal on Tuesday. Messi orchestrated an Argentina performance that at last reached the attacking heights if which it should be capable, setting up five of the six goals and generally playing with a playful menace. Marcos Rojo put Argentina ahead after 15 minutes and when Javier Pastore added a second 12 minutes later, the game already seemed over.” SI – Jonathan Wilson (Video)

Even hostile Chile fans forced to acknowledge Lionel Messi’s greatness
“The problem with a genius like Lionel Messi is that you’re always waiting for him to perform. You can’t watch a game he plays in as you watch any other game because you’re always hoping that this will be of those days when he turns it on, and if he doesn’t you end up feeling a little cheated. Nobody felt cheated on Tuesday night, just grateful to have been there, unless you had the misfortune to be a Paraguayan defender. The Chile fans who made up most of the crowd and who had begun the game by jeering the Argentinian national anthem and chanting ‘Argentinos – hijos da puta’ ended it in awed applause.” Guardian – Jonathan Wilson

Tactical Analysis: Argentina 0-0 Colombia (5-4 pens) | Messi and co. through to semis despite ultra-defensive Colombia
“In another battle between two giants of South American football, Argentina squared up against Colombia with the tantalising prospect of a possible semi-final clash with Brazil. Gerardo Martino’s men were tipped by many to go all the way in the competition and have looked on course to do so, though they are still yet to hit their stride. Colombia, on the other hand, have underwhelmed throughout the competition, scraping through to the quarter finals and scoring just one goal in their first three games.” Outside of the Boot

This entry was posted on Thursday, July 2nd, 2015 at 7:17 pm and is filed under Argentina, Copa America, Football Manager, Jonathan Wilson. You can follow any responses to this entry through the RSS 2.0 feed. You can leave a response, or trackback from your own site.