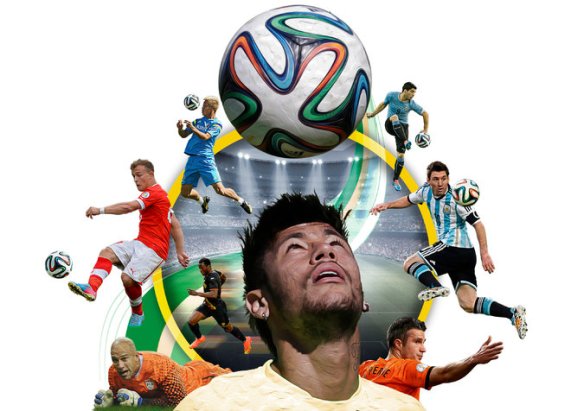 “The top players are here (mostly), the stadiums are ready (sort of) and preparation time is up: The 2014 World Cup begins Thursday. After Brazil takes center stage in São Paulo (yes, Croatia will be there, too, but all eyes will be on the host), the two biggest heavyweight fights of the first round arrive in short order: Spain versus the Netherlands on Friday and England versus Italy on Saturday. So settle in for the next month and enjoy.” NY Times

“The metro strike has ended in São Paulo, Brazil’s largest city, for now. Jerome Valcke, FIFA’s Secretary General in town for the FIFA Congress, says there is no Plan B to get 61,000 fans to the nearly finished Itaquerão stadium. Of course, there might be a general strike across the country on Thursday, but it’s maybe, probably just a rumor. Panic has ensued. Calm Down! Hurry up! Slow down! How do I get to the stadium?” Fusion

“There has never been more pressure on a side to win a World Cup: the hosts are always expected to exceed expectations, but the expectation in Brazil is always to win. Following two disappointing quarter-final exits in 2006 and 2010 – and let’s not forget, Brazil started both those tournaments as favourites – another failure won’t be tolerated. In re-appointing Luiz Felipe Scolari, the World Cup-winning coach from 2002, Brazil find themselves with a fine manager capable of working, and thriving, under such great pressure. While judgement of his performance will be entirely dependent upon what happens in the next month, he’s performed an extremely good job so far.” Zonal Marking

“The Estádio do Maracanã in Rio de Janeiro has a special, rueful place in the Brazilian psyche. It is beloved by all who have seen it, even at its rundown worst. When it came to be renovated for the first time, it was feared it was an impossible task. So much human urine had been expelled over its concrete foundations that it had made the stadium structurally unsound. It was also the venue of an event that Brazilians had never forgotten, from the last time the country hosted the tournament: the 1950 World Cup final. Those who weren’t born then have never been allowed to forget it either.” CNN – James Montague

“Why Watch & Tweet? If you can’t watch a World Cup match, then you should be on Twitter following micro-rants that break news and breath life into a digital stream. (Actually, you should be reading our live blog, which will be delivering so many gifs that you’ll feel you’re watching the actual game.) Even if you can watch, you might still want to have Twitter open on a second screen. Why? Because it’s like watching with a bunch of your friends–really smart and connected ones, funny ones, and a lot of idiots–except you don’t have to smell, share a bathroom with, kick out, or clean up after any of them. How to Follow Specific Teams & Matches. To find and share content specific to a country, simply follow and use the applicable hashtag. Each of the 32 countries has a three-letter abbreviation. They are…” Fusion 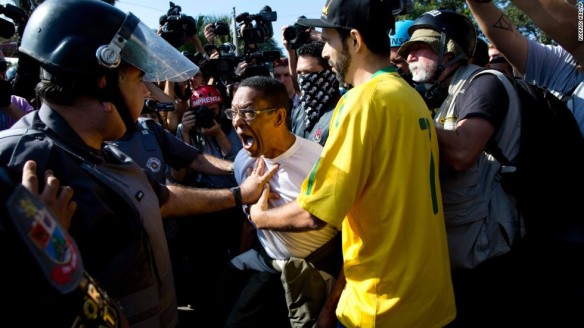 A protester argues with police during the Sao Paulo demonstration on June 12. Two CNN journalists sustained minor injuries at the scene.
“A Brazilian policeman stands behind shields during clashes with protesters in Sao Paulo, Brazil, on Thursday, June 12. The buildup to the World Cup has been plagued by mass demonstrations over the estimated $11 billion cost of staging the soccer tournament. Many protesters, angered by the state of Brazil’s public services, believe the money would be better spent elsewhere.” CNN

“The World Cup is always a fantastic barometer of the prevailing style of football in any era. Games from Chile in 1962 were amazingly physical and aggressive, by the 1970s things had become more cultured and technical, and in 1990 defensive organisation and structure was the overriding feel. What of 2014 in Brazil? What will distinguish it from World Cup 2010 — and, indeed, from World Cup 2018? Here are three key features of the 32 sides competing over the next five weeks.” ESPN (Video)

“Spain’s current run of success is unprecedented – two European Championships, with a World Cup between. When you consider their distinctive playing style, and the way they’ve taken possession football to the extreme, they’re unquestionably one of the greatest international sides in history. They are, however, more vulnerable than in previous years. That’s because key players have declined since Euro 2012. While others have been in and out of the side, Xavi Hernandez and Andres Iniesta have been the two midfield stars consistent throughout Euro 2008, World Cup 2010 and Euro 2012. They’re the personification of Spain’s Barcelona-based tiki-taka game, and together they had their least impressive season for years. At his best, Xavi controlled matches better than any midfielder in the world, maybe better than any midfielder ever has, but now there are questions about his mobility and capacity to lead this side. Iniesta’s season at club level was disappointing, but he always delivers at international tournaments, and for the first time it is Iniesta, not Xavi, who must become Spain’s technical leader.” Zonal Marking

“Here is one thing I can predict with total certainty about this World Cup: an as-yet-to-be determined number of goalies and referees are going to suffer terrible fates. They will be vilified. They will ruin their lives as we watch. They will shoulder the rage and sorrows of entire nations. As we saunter into this month-long spectacle, let us take a moment to thank them. For their suffering is what makes this theatre possible.” New Republic – Laurent Dubois