Football violence: a view from around the world 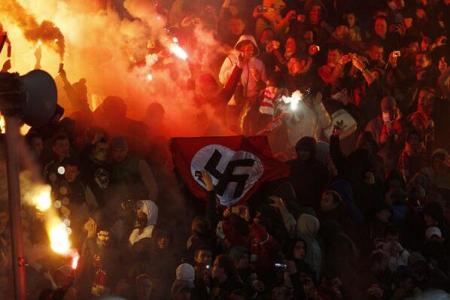 Spartak Moscow fans displaying a Nazi flag during a game at Shinnik Yaroslavl.
“Brazil: violence around games on the rise. Brazil ends 2013 with a record in football violence deaths. It was a miracle that nobody died in the festival of thuggery that took place on 8 December at the Atlético Paranaense v Vasco de Gama match in Joinville, during the last round of the Campeonato Brasileiro, whose shocking images were beamed all around the world. That, however, did not prevent Brazilian football finishing its 2013 season with the saddest of milestones: the 30 deaths in football-related incidents this year is the highest number in the history of the game in the country. What’s more worrying is that fatal cases have been rising steadily in the past few years. …” Guardian

World Cup – and outbreak of supporter violence – link Brazil and Russia
“In six months’ time the World Cup will land in the home of joga bonito clad in a Fifa-approved wrapping of sun, sea and samba. But the dark side of the beautiful game in Brazil was in evidence earlier this month, when images of running battles between fans of Atlético Paranaense and Vasco da Gama shocked the watching world. The game was being held at a neutral ground in Joinville due to previous clashes between fans of the two clubs, but within 10 minutes Globo was broadcasting close-up footage of supporters repeatedly stamping on the heads of their rivals and chasing one another around the stadium bowl. Following a long interregnum, the fighting was eventually broken up by armed security firing rubber bullets into the crowds and an army helicopter landing on the pitch, but not before several fans were seriously injured.” Guardian

This entry was posted on Thursday, December 19th, 2013 at 8:02 pm and is filed under Brazil, Europe, France, Germany, Holland, Italy, Jonathan Wilson, Scotland, World Cup 2014. You can follow any responses to this entry through the RSS 2.0 feed. You can leave a response, or trackback from your own site.