Fifa World Cup 2014: All you need to know about the draw 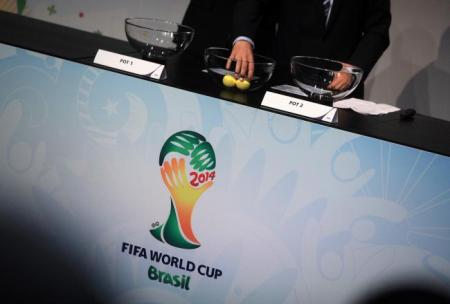 “The 2014 Fifa World Cup takes place in Brazil, starting on 12 June and finishing on 13 July. It will be the 20th time the tournament has been held and the first to take place in Brazil since 1950, when the host nation lost to Uruguay in the final. This Friday will go some way to determining the prospects of the 32 participating nations when the draw for the group stage takes place.” BBC (Video)

“Tottenham went ahead twice, but mistakes allowed Manchester United back into the game. Andre Villas-Boas brought back Vlad Chiriches in defence, Mousa Dembele in midfield, plus Aaron Lennon and Nacer Chadli on the flanks. David Moyes was still without Robin van Persie and Michael Carrick – Tom Cleverley partnered Phil Jones in the middle, despite the option of £27.5m signing Marouane Fellaini. There was no major theme throughout this game, aside from its openness, but there were a variety of interesting tactical points.” Zonal Marking

Tactics Board: Rooney work ethic shines through
“There are different ways to play as a lone striker and Roberto Soldado and Wayne Rooney provided a study in contrasts. The Tottenham attacker has been criticised for being a peripheral player who does not get involved enough in the build-up play. Against Manchester United he had 25 touches — three fewer than against Manchester City seven days earlier, although he was substituted with 17 minutes remaining.” ESPN

Tottenham Hotspur 2-2 Manchester United: Tactical Analysis | Spurs’ superior deep-lying midfield
“Tottenham Hotspur took on Manchester United at the White Hart Lane, both fresh from disappointing league results. The home side had been absolutely thrashed the previous week by Manchester City, with 6 goals flying past them, while United were held away to Cardiff. Many were calling it a must win for both sides, the home side possibly more so. The result, though fair, didn’t do either side any favours.” Outside of the Boot

Lack of Moyes’ identity to be tested vs. Everton

“A recent development in our expectations of football managers is the insistence that they boast an overarching managerial ‘philosophy’ or ‘ideology.’ It’s apparently no longer enough to simply pick the correct players and formulate tactics to get the best from them — there’s a need for a grander, long-term, all-encompassing insistence upon a particular playing style. While managerial strategy has been a crucial factor in top-level football for decades, these lofty expectations are relatively new — but it’s already become an entrenched factor whenever a new manager takes charge of an elite club. Seven of the current top nine teams in the Premier League have appointed a new manager over the past 18 months, and in almost every case it was easy to deduce their philosophy upon their appointment.” ESPN – Michael Cox

“A friend of mine is a fan of F.C. København, the most successful Danish league side of the last 10 years. København have won 7 of the last 10 Danish Superliga titles, but are more famous for being a Cinderella team that beat Manchester United and drew Barcelona and Manchester City in the Champions League. Remarkably, however, København is not the most successful Cinderella that Denmark has produced. That honor belongs to the Danish team that won Euro 1992 against all odds, which wrote a fairy tale that can rival any work by Hans Christian Andersen.” Soccer Politics

“Bassam used to be a striker for Izra, an amateur team in Daraa, southern Syria. He is 31, but his slight stoop and the lines around his eyes give him the look of a much older man. In early April, rebels seized a government air base on the outskirts of Daraa, the army counterattacked and the area has been the scene of fierce fighting ever since.” Guardian – Jonathan Wilson

“… Another game without a goal for the Brazilian who squandered many of Barcelona’s best chances en route to this goalless display. However, unlike many others I’m going to side with the former Santos star — criticising someone for missing chances is all well and good, but when that player is the only one intelligent enough to break down the opposition defense, you’re made to look a little foolish. Just imagine how few chances we would have created without Neymar’s movement and skill…” Barca Blaugranes

“Football fans have been warned to expect a ‘World Cup of terror’ at the hands of Brazilian crime gangs. The threat was issued by the First Capital Command (PCC as it is better known in its Portuguese acronym across Brazil) in Sao Paulo, who last year was behind the murder of more than a hundred of the city’s police officers. The gang, the biggest criminal organisation in Brazil, is operated from within the country’s prison system and membership numbers run into the thousands.” Backpage Football