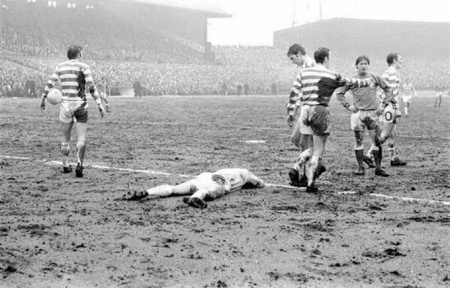 “Last year the sad, mad, brutal and beautiful series known as Celtic versus Rangers came to an end after an unbroken 125-year run. Proud Rangers—one of the oldest, grandest, richest clubs in world football—simply ran out of money. The reasons why this happened would not be unfamiliar to sports-watchers anywhere on earth: greed, envy, and overspending all played a role. There were unique local wrinkles—the Scottish media all but ignored the calamity at the same time as it was being masterfully reported and dissected by anonymous bloggers, especially the unnamed author of a suspiciously well-informed blog called Rangers Tax Case. But the demise of the august club, which was sent to the lowest league in Scotland last year, raises more universal questions for those of us who, like the RTC blogger and me, wear Celtic’s green colours. Should we gloat? Should we grieve? What does it mean to support a team whose greatest and only rival is gone?” ROADS & KINGDOMS

“Football is never far away from its next scandal and allegations of match-fixing certainly dent the reputation of the beautiful game. But is it right to call the recent claims of wrongdoing ‘match-fixing’? Sam Sodje, a former Portsmouth player, was filmed by an undercover reporter claiming he could arrange for footballers to be booked for a £30,000 fee and a sending-off for £50,000 to £70,000 in order to facilitate betting fraudsters. Six people have been arrested, including DJ Campbell, the Blackburn Rovers striker. Emotive terms like ‘plague’ and ‘cancer’ have been used in the media and there have been calls for fixers to be banned for life, but why has no-one asked whether it is actually possible to make substantial amounts of money by betting on yellow and red cards?” BBC

“Whatever else is wrong with domestic football in Argentina – and it is a lot – it does have the huge advantage of being extremely competitive. Going into the final weekend (although a number of teams are already finished) of the Torneo Inicial, the top four are separated by two points – and are playing each other.” Guardian – Jonathan Wilson

“The strangest thing about Manchester United this season has been the disparity between its European and its domestic form. A 1-0 win over Shakhtar Donetsk — shaky as United was in the first half — ensured David Moyes’s side topped its Champions League group, but all that victory did was temporarily ease the pressure. And that, to an extent, is Moyes’s problem at the moment: the story, as was always likely, has become that of his struggle to replace Sir Alex Ferguson and every result, every performance, every utterance now is refracted through the prism of that narrative.” SI – Jonathan Wilson

“For those who yearn for the days of simple, old-fashioned knockout football throughout the duration of the European Cup, there are two standout contests among the eight matches on Wednesday, the final day of the Champions League group stage. Whereas the matches in Group F are interdependent — as is also the case in Group G — there are simple, winner-take-all contests in Groups E and H between second and third, with the first-place side already qualified and the last-place side out of the running. There will be no checking other scores, no working out goal difference, no looking up rules about head-to-head records. The knockout stage has effectively come early.” ESPN – Michael Cox

“Riccardo Montolivo’s early dismissal meant Ajax spent an hour trying, and failing, to break down Milan’s deep defence. Max Allegri made huge changes from the side which drew 2-2 at Livorno, bringing in six players – Stephan El Shaarawy was the most eye-catching inclusion, although he didn’t last long. Frank De Boer also made a few changes. Bojan started upfront against his former club, while Daley Blind was at left-back with Christian Poulsen coming into the midfield. This was far from open, but it was certainly entertaining. Montolivo’s red card forced both managers to change their plans quickly, and overall Ajax – the side needing the win – were unimpressive in their attempts to score.” Zonal Marking

Champions League: Which teams have qualified for the last 16?

“Chelsea, Manchester City, Arsenal and Manchester United are all through to the last 16 of the Champions League. All four German clubs – holders Bayern Munich, Borussia Dortmund, Bayer Leverkusen and Schalke – progress and join Spanish trio Barcelona, Real Madrid and Atletico Madrid in the knockout phase. AC Milan will be the sole Italian representative after Christmas as Serie A leaders Juventus could only finish third in Group B.” BBC