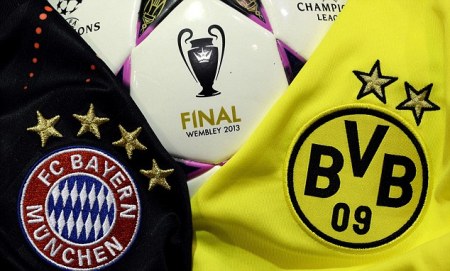 “The key to Bayern Munich’s success throughout 2012-13 has been their adaptability. On their way to a record points total in the Bundesliga, Bayern’s ball retention was consistently remarkable, while in the Champions League victories over Arsenal, Juventus and Barcelona they have been equally impressive when using a physical approach designed to overpower the opposition.” Guardian

The Champions League Final: Fünf brennende Fragen
“… So it’s disconcerting that the Oxford-Duden German Dictionary appears to contain not a single entry corresponding to ‘the strange curiosity one feels regarding the 2013 Champions League final between Bayern Munich and Borussia Dortmund, the first all-German European Cup final in history, which will be played Saturday at 2:45 p.m. ET at Wembley Stadium in London, and which feels oddly compelling despite the fact that the teams involved have played one another approximately 345 times in the Bundesliga this season.’ I mean, you’d think they’d be all over that, right?” Grantland – Brian Phillips

What’s on the line for Bayern, Dortmund, all of Germany in CL final
“1. This doesn’t mean the Bundesliga is the best league in the world. What constitutes “the best” football league? If it’s affordability, sustainability, indigenous talent on pitches and benches and a decent stadium experience you’re after, the Bundesliga is your bag. Most of these factors, while commendable, are only of real concern to German fans, however. As an international entertainment “product,” the Bundesliga is still miles behind the Premier League and will continue to be so unless there are three or four Bayern Munichs, competing for the best international players and entering the Champions League with a realistic view to winning it. That will take a lot of time and even more hard, smart work, even if dormant giants like Hamburger SC, 1.FC Köln or VfB Stuttgart will begin to wake up.” SI

Bayern and Dortmund bring Bundesliga battle royale to Wembley
“Saturday’s Champions League final between German powers Bayern Munich and Borussia Dortmund could be the greatest clash between good and evil since the Book of Mormon. Bayern are Germany’s superclub, a possession-hungry, passing, pressing powerhouse that are loved or loathed, but always feared. Dortmund, the resurgent underdogs, prefer to thrill with movement and speed — a fearless young team that run hard and attempt to overwhelm opponents with a vicious transition game.” ESPN (Video)

This entry was posted on Friday, May 24th, 2013 at 6:24 pm and is filed under Champions League, Football Manager, Germany, Run of Play. You can follow any responses to this entry through the RSS 2.0 feed. You can leave a response, or trackback from your own site.