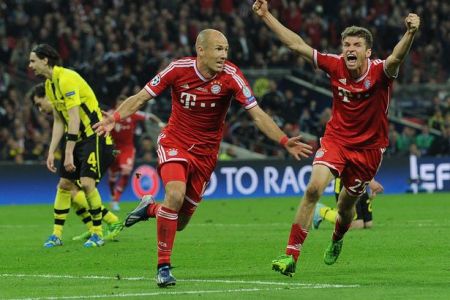 “Bayern initially struggled to get into the game, but eventually emerged victorious after a strong second half performance. Jupp Heynckes selected Jerome Boateng rather than Daniel van Buyten at the back – the only real selection decision either manager had to make. Jurgen Klopp named his expected XI. Dortmund started the game excellently, pinning Bayern back and attempting six shots before Bayern had managed one – but eventually their pressing dropped, and Bayern continually exploited the space in behind the Dortmund defence.” Zonal Marking

Champion Bayern Munich sets magnificent yet troubling standard
“For Bayern as a whole, this was a story of redemption. For Arjen Robben, in particular, it was a story of redemption. And for Jupp Heynckes it was, a story of vindication, of proving his point so that he can leave, having been forcibly retired, having proved he is a winner and having become only the fourth coach — after Ernst Happel, Ottmar Hitzfeld and Jose Mourinho — to win the European Cup with two different teams. Bayern had lost in the final in 2010 and 2012. It had been defeated at the last in 1999. It had lost surprisingly in 1987 and 1982. It had come to look guilty of that least German of attributes: choking. There was a moment at Wembley when it looked as though it might once again falter at the last: after an awkward opening half hour it had dominated and had taken the lead, before conceding an equalizer with a wholly needless penalty.” SI – Jonathan Wilson

Borussia Dortmund v Bayern Munich: Thomas Müller simply refused to be denied in Champions League final
” On the eve of this visit to Wembley, and reflecting on chastening nights in Madrid and Munich, Müller had observed: “If you lose three finals in four years, you are going to be labelled chokers.’’ Not here. Not on Müller’s watch. He would not let it happen. Bayern would not be called chokers. Müller and his team-mates wanted this too much. They were too fit, a reminder of the exceptional medical conditioning of the celebrated physician Hans-Wilhelm Müller-Wohlfahrt. Bayern were too hungry, particularly as a compelling game wore on and the lactic acid ganged up on Borussia Dortmund.” Telegraph – Henry Winter

Dortmund 1-2 Bayern- Tactical Analysis
“A full house and an electric atmosphere greeted the two top teams of Germany and Europe in the UEFA Champions League Final. Bayern came into the game as favourites to win the game,and won a wonderful end-to-end contest. A weakened Dortmund team started without their talisman and future Bayern player, Mario Gotze. Weidenfeller started at the back, with the usual back 4 of Pisczcek, Schmelzer, Subotic and Hummels in front of him. In midfield, Bender and Gundogan were the deeper pair, and Grosskreutz, Reus and Kuba were in the advanced roles. Up front, it was the Pole, Robert Lewandowski.” Outside of the Boot

Robben gets redemption as Bayern Munich wins Champions League
“… Arjen Robben, a winger but always in the center of things. We saw by turns the worst, the best, the worst and finally the best again of the brilliant Dutch midfielder. It is ever thus with Robben. In the first half, he had golden chances on two occasions but failed to convert as Dortmund keeper Roman Weidenfeller stoned Robben twice, bringing back memories of similar Robben chances in the 2010 World Cup final.” SI