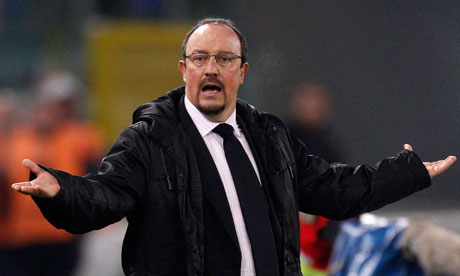 “1. It’s all about Chelsea. This was a lively weekend in the Premier League. Manchester United came from behind to win again, beating Queens Park Rangers, 3-1, to regain first place. In another entertaining game, West Brom won 4-2 at Sunderland to climb to the oxygen-deprived heights of third. Arsenal followed emphatic victories over Tottenham and Montpellier with an utterly insipid performance at Aston Villa. The Gunners managed just one shot on target in a 0-0 draw. On Sunday, Clint Dempsey finally began to look comfortable with his new teammates, helping to set up two goals as Spurs rediscovered their mojo with a 3-1 home victory over a woeful West Ham. But none of these matches can alter the fact that this week has been all about one club: Chelsea.” SI

“Researching or studying football tactics can seem like an overwhelming task, simply because aside from the basic framework provided by the rulebook, so much else is left fluid. Formations, player roles, player positions, they all mean something different depending on the context and meaning of the speaker. Is a striker always a striker? What about when he’s a false nine? Is a midfielder always a midfielder? If his main job is to tackle and shield, wouldn’t that make him a defender? Football’s most loved characters and teams have been the ones that transcended the duties of their positions, rising to a higher plane. Franz Beckenbauer scoffed at the idea that a defender should be confined to a third of the pitch. Total Football placed players anywhere they could be useful. Positions are changing constantly, and by extension so are the players that fill them.” EPL Talk

“Some time towards the end of January, Théophile Abega stopped replying to my calls. I was in Equatorial Guinea, heading on to Cameroon, and was keen to meet him, partly to talk about the rivalry between Thomas N’kono and Joseph-Antoine Bell for my book on goalkeeping but mainly because, well, because he was Théophile Abega, one of the most skilful African midfielders of all time, the man who led Cameroon in 1984 to their first Cup of Nations triumph, scoring a brilliant goal in the final.” Guardian – Jonathan Wilson

“Newcastle finished in a very impressive fifth place finish last season, drawing plaudits from across the footballing World. After a recent dip in form and expectations, Pardew appeared to have brought Newcastle back to the upper echelons of the footballing elites, with one eye on potential Champions League spot. Memorable victories last season included an impressive 2-0 victory at Stamford Bridge as well as a big 3-0 win at home to United.” Think Football

“Juventus lost in Serie A for the second time under Antonio Conte. Max Allegri continued with the 4-3-3 shape he used away at Napoli last week – Mario Yepes replaced Francesco Acerbi at the back, while Marco Amelia started in goal. Antonio Conte picked Martin Caceres on the left side of defence in place of the injured Giorgio Chiellini – previously, Caceres has played to the right of the back three, with Andrea Barzagli moving across, but Barzagli remained in his usual position. Ahead of him, Mauricio Isla started rather than Stephane Lichtsteiner, who must have been more badly injured than was reported before the game. Milan were a shade fortunate to win the game – it was universally agreed that the ball didn’t strike Isla’s arm for Robinho’s penalty – but overall they were the better side, as Gigi Buffon agreed. They defended solidly and attacked at great speed.” Zonal Marking