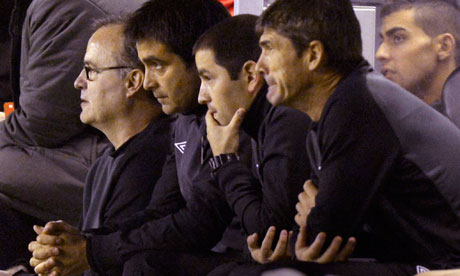 Athletic Bilbao coach Marcelo Bielsa
“A spectre is haunting Europe – the spectre of goals. They’re everywhere – in every competition, in every country, in every stadium (apart from games involving Sunderland). Four-goal leads are regularly obliterated (Angola v Mali, Newcastle v Arsenal, Germany v Sweden, Arsenal v Reading). Lionel Messi, Cristiano Ronaldo and Radamel Falcao break goalscoring records every week. Everybody attacks, all the time. In the top flights of England, France and Spain, there has been a clear upward trend in the numbers of goals scored per game over the past decade. Last season, for the first time ever, the knockout stage of the Champions League yielded more than three goals per game and that has continued into this season’s group stage, with 3.03 goals per game. And even in Italy and Germany, where goals per game have remained relatively constant for 10 years, this season is showing above average numbers of goals.” Guardian – Jonathan Wilson

How English game of pace and power benefits from European precision
“More passes, less ‘hoofs’ from back to front, and a slicker goalscoring rate: the Premier League has become a more technical “continental” competition that is a fusion of English pace and power and European subtlety. These are the implications of statistics from Opta that chart a shift over the past five years from a direct approach to a more patient game that now features greater precision in passing and finishing. The national team continue to see little benefit from this evolution, with experts citing the prime factors as the influx of foreign players and coaches, better club pitches and training facilities, a clampdown on tackling and the influence of a Champions League dominated by Barcelona’s carousel-passing style.” Guardian

“When Brendan Rodgers got the Liverpool job, he brought in a very Spanish-Dutch style of play. Possession is everything. All offensive and defensive work starts with the ball. When you are without the ball you need to win it back as quickly as possible. Rodgers has already spoken about his desire to see Liverpool play and win through domination of the playing zone. ‘Death by football’ was his direct quote. The Spanish style popularized by Barcelona and La Roja also accepts the Total Football idea of only requiring one strategy. When Barcelona are losing, they don’t throw balls into the box without thinking. They continue their strategy of passing around the opponent.” EPL Talk

“Glance at the Serie A table, and you’d be forgiven for wondering what has changed at Fiorentina. From 13th place at the end of a difficult 2011/12, they’re now riding high in fourth position, having won five of their last six games. Inspect their squad list, and it’s obvious what has changed. Of the 21 players Vincenzo Montella has used in Serie A this season, 16 were signed in the summer. As a club that went bankrupt a decade ago, then had to continually evolve their side as they climbed from Serie C2 to the Champions League, Fiorentina are used to transformations – but a 75% playing staff turnover remains extraordinary.” ESPN – Michael Cox 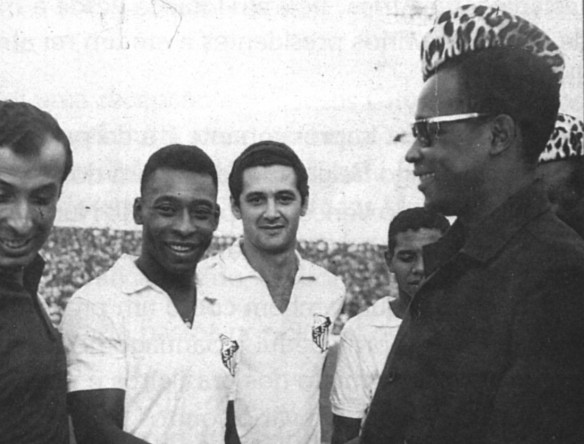 Mobutu (right) with Pelé in 1968 – Zaïre – 1974 World Cup
“In 1974 the ex-colonial and newly named Zaïre played its first World Cup in West Germany. The country’s diminutive strongman Mobutu Sésé Seko, famous for his trademark leopard-print pillbox hat, had rechristened the Lions the Leopards. (Consistency is key in propaganda.) He had convinced himself that Zaïrean soccer could further elevate his own stature. He liked elevating himself and he liked renaming things. He’d re-minted the country from Congo Crisis First Republic (formerly The Belgian Congo) to Zaïre, which translated to, ‘The river that swallows other rivers.’ He fully intended to hoover up every power and exploit every possibility. He’d already outlawed all political parties except his own, and outlawed all wearing of leopard-print hats, except of course his own.” Cult Football

Dictators and Soccer: Nicolae Ceaușescu, Genius of the Carpathians
“Up until Christmas 1989 when a three-man firing squad executed Nicolae Ceaușescu and his wife Elena after a quickie two hour tribunal, the archetypal Iron Curtain strongman ruled Romania with an iron fist. After getting strafed with bullets, however, the iron fist swiftly went limp, then rigor mortis. And as the title up top suggests, soccer most definitely played its part in the image engine of the autocratic regime.” Cult Football

“Craig Levein. Judging by how the post-game talk was dominated by whether the Scottish FA should replace him or not when Scotland lost to Belgium in the World Cup qualifying stage, a defeat that left them bottom of their group with just two points, you would think that pointing at the manager was all that was needed to identify the reasons behind this dire situation. Yet, for all Levein’s defects and mistakes, the fault lines of Scottish football lie much deeper than the manager’s role. For a nation that once produced world class players like Kenny Dalglish and Dennis Law, Scotland now struggles to produce players who are even remotely close to that level. There are many reasons for that, yet one of them has to be the lack of vision shown by clubs. Few have dared to be innovative; fewer still have been brave enough to build their teams around the players coming through their system.” In Bed With Maradona

“The 1960′s were characterized by Germany’s gradual rise as a force in international football again. The success in 1954 had been a one off but from the late 1960′s Germany was an established force in international football and the rewards paid off in European Cups as well as triumphs at the European Championship in 1972 and the World Cup in 1974. More importantly, the 1960′s saw the formation of the Bundesliga, which became an instant success story. This is the first piece in a series covering the last 5 decades of the Bundesliga, commencing with the 1960′s.” Bundesliga Fanatic