The End of Barcelona 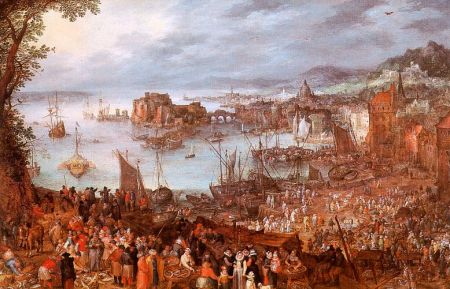 The Great Fish Market – Jan Brueghel the Elder
“I have a new piece in Slate about the Champions League final and whether we’re about to see the end of Barcelona’s magical run of the last few seasons. Of course, no sooner had I ventured this possibility in a draft than I went down with a sudden, bad case of food poisoning; most of this was written while I was clinging to the edge of the bed, sustained by nothing but Gatorade and rice. So take that into account, if you believe the universe avenges its chosen children.” Run of Play

Sic Transit Gloria Messi
“For the past three years, soccer has been dominated, utterly and ruthlessly, by a reign of Spanish prettiness. Spain’s national team won Euro 2008 with a rapturous mix of intricate passing and outrageous goal-scoring, then repeated the feat, albeit less dazzlingly, at the 2010 World Cup. Meanwhile, F.C. Barcelona took many of the same Spanish players—plus Lionel Messi, the Argentine superstar who’s lived in Spain since boyhood—on a fey romp through worldwide club soccer.” Slate

This entry was posted on Thursday, May 26th, 2011 at 6:51 pm and is filed under Champions League, FC Barcelona. You can follow any responses to this entry through the RSS 2.0 feed. You can leave a response, or trackback from your own site.