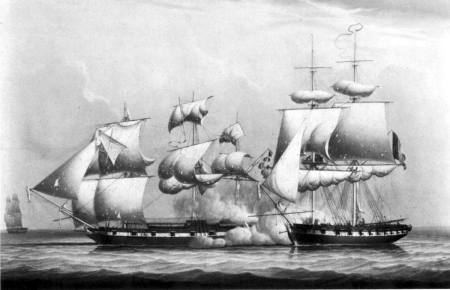 Action Between the Will of Liverpool and a French Privateer, February 21, 1804 1823, Robert Salmon
“I have to admit that I wholeheartedly bought into the Spanish revolution at Liverpool; so much more than the French one that went before it. The big difference, of course, was that we got the best of Spanish: best manager, best players. By contrast, we had a second-rate French manager (by comparison with Arsene Wenger, at least). Given that Arsenal had not only got the better French manager, but got their first (two years earlier, in 1996), Liverpool was never going to be the primary destination for elite French talent.” Tomkins Times

“Perhaps the thing that Gabonese football has been mentioned for most in recent years is its national team’s respectable FIFA World Ranking although not for the reasons you might think. The upcoming African Cup of Nations could change all that…” In Bed With Maradona

Leo Messi’s Groin and the Glamour of Journalism

“THERE are occasions in a gal’s life when she just can’t say no. Jose Mourinho, Ipad2, weekend in New York, In Bed With Maradona. Temptations were made of this. Sadly Jose has not yet been on the blower, and neither Apple nor the Big Apple look likely, so thank goodness for IBWM. The chat-up line went something like this: Write as much as you want on anything you want. Ah, sweet nothings; I’m such a sucker. (I’m also a sucker for a semi-colon, a grammatical hiccup widely regarded as a deadly sin in tabloid world. Which. Is. Why. I. Go. For. A. Full point. Usually.)” In Bed With Maradona

“In a match that superseded all expectations, Twente claimed the victory with a dramatic overtime winning header by Janko to win the Dutch Cup for the third time in the club’s history. In contrast to what might have been derived from both team’s managers pre-match, when they stressed the importance of next week’s fixture deciding the Eredivisie title, both teams did not hold back and a true football fest was the result.” 11 tegen 11

“A shimmy and shammy as purty as a Tennessee beauty queen saw Iniesta glide through a sluggish Espanyol defence to set Barcelona on their way in what was, considering the bust-ups of recent years, a somewhat boring Catalan derby. Barcelona just need a single point against Levante on Wednesday to win the title, providing Real Madrid dodge their local civic duty and beat Getafe the day before.” FourFourTwo

English football: Directed by The Thick

“Clever footballers seem destined to fail. When Craig Bellamy questioned Roberto Mancini’s tactics at Manchester City last season, he was punished – and rightly so, said the pundit mafia – but what if he was right? What if an eloquent, insightful player did know better than his consistently average manager?” surreal football