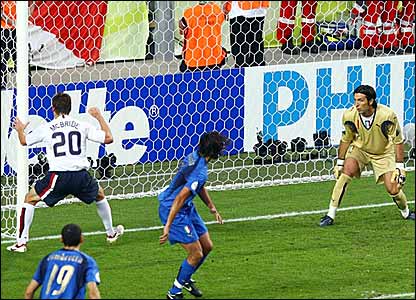 USA vs Italy 2006
“If you’re not too familiar with the USA soccer team, then you’d be forgiven for thinking its World Cup history is all fairly recent. If so, then you’re in for a surprise. Though there’s a gigantic 40 year gap smack bang in the middle of this story, the USA’s World Cup history begins at exactly the same time as the tournament itself, as they were one of the teams competing in the inaugural 1930 World Cup.” (World Cup Blog), (Part II: 1990 – 2006)

World Cup Tales: Colombia 1986 – The World Cup That Never Was

“The upcoming World Cup will the first to take place in the entire continent of Africa but there are several countries that have already held the tournament more that once, such as Italy, France and Germany. The first team to earn the honour of hosting the World Cup finals twice, however, was Mexico and the story of how this came to pass is as much a story of the politics of FIFA as it is of the qualities of Mexico when it comes to hosting the finals of the tournament. The truth of the matter is that the hosts of the 1986 World Cup finals should have been Colombia.” (twohundredpercent)

“I often wonder about human potential. We know that young people learn fast both cognitively and viscerally. It’s as if everything has been juiced for children’s easy consumption while we grownups have to eat things raw.” (Run of Play)

“The Premier League may not be home to the best football, an honour belonging to La Liga of Lionel Messi and Cristiano Ronaldo, but it is certainly home to the most excitement. The Spanish keep their beach-balls on the beach. The season lacked a star but not drama and there was enough barmy material to keep soap-opera scriptwriters in episodes for years.” (Telegraph – Henry Winter)

“In case you’ve missed the series of articles, Soccernet has been delving into the history of the World Cup with some great lists it calls First XI. Take a look.” (ESPN)

“Fast Forward is our most ambitious project to date and it has taken over a year to come to fruition. The premise was simple; we asked some of our favourite bands to write about one of the 32 countries participating in South Africa 2010, the only stipulation being that the song be themed on their chosen country and if possible be football related. As you can imagine this definition was interpreted in about 32 different ways but the results are as colourful, imaginative and exciting as the event they will be used to showcase.” (Fast Forward)