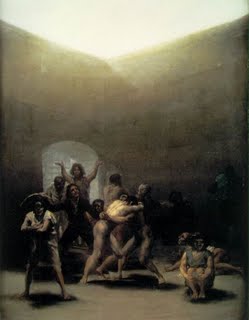 Goya
“The police will be standing there, arriving to arrest those caught on CCTV cameras causing mayhem at Upton Park. So now it is down to the magistrates. Only by properly punishing Tuesday’s trouble-makers, and that means with custodial sentences, can an enduring cancer, albeit one that has been largely undetected in recent years, begin to be excised.” (Telegraph – Henry Winter)

British Soccer’s Hooligan Violence Stokes Old Fears
“Hooliganism was a staple of British soccer from the 1960s through the ’80s. Marauding fans wreaked havoc on cities and stadiums across Europe, sometimes with fatal consequences. The Hillsborough Disaster, in which 96 Liverpool fans died in 1989, was the nadir of this period, and all of British soccer.” (WSJ)

Football should not beat itself up over violence
“Say what you like about football; at least the blood is real. And concern about last night’s riots at Upton Park will be authentic too, not just in the corridors of the FA’s new Wembley headquarters but in Downing Street, for the Government are firmly behind England’s bid for the 2018 (or, if that fails, 2022) World Cup.” (Times)

Everyone knew West Ham game was going to kick off
“A certain element smiled when West Ham and Millwall were drawn together, while the rest of football held its head in its hands. When those two teams meet it goes beyond football and the game should not be punching itself on the nose over what happened.”> (Guardian)

This entry was posted on Thursday, August 27th, 2009 at 6:46 pm and is filed under Uncategorized. You can follow any responses to this entry through the RSS 2.0 feed. You can leave a response, or trackback from your own site.