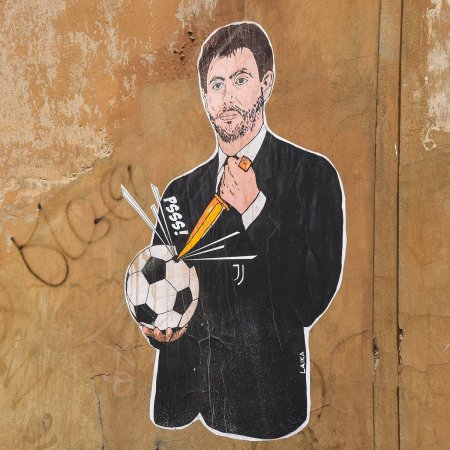 A mural in Rome depicting Juventus president Andrea Agnelli puncturing a football with a knife. Juve backed the doomed European Super League breakaway.
“Remarkably, the website is still live. Eight months after the European Super League disintegrated in an embarrassing fireball, you might think its founders would be minded to erase all trace of their hubris and humiliation. But perhaps that would be to credit them with too much competence. And so there it remains to this day: ‘The Super League is a new European competition between 20 top clubs comprised of 15 founders and five annual qualifiers.’ Well, good luck with that. There is, of course, an alternative theory. After all, the Super League is still not quite dead in a legislative sense; certainly not if you believe the loud and persistent avowals of Andrea Agnelli at Juventus, Joan Laporta at Barcelona and Florentino Pérez at Real Madrid, the three remaining hoarse men of the apocalypse. …”
Guardian

This entry was posted on Monday, December 27th, 2021 at 12:58 am and is filed under Belgium, Chelsea, Europe, European Super League, FC Barcelona, FC Liverpool, France, Germany, Holland, Manchester City, Manchester United, Real Madrid, UEFA. You can follow any responses to this entry through the RSS 2.0 feed. You can leave a response, or trackback from your own site.